The nominations have been announced for DJ Mag's Best of North America poll.

DJ Mag’s sister awards to our revered Best of British Awards across the pond, the Best of North America Awards returns for year two. We at DJ Mag understand more than anyone the often-polarizing nature of the Top 100 DJs Poll, but it’s a public vote and subsequently, out of our control. Instead of getting mad at the Top 100 get hip to the BoNA!

DJ Mag is excited to announce that we’ve teamed up with Relentless to live stream Labyrinth In London's takeover at Tobacco Dock this Saturday (31st March).

Set to perform this coming Saturday will be the main man himself, Hot Since 82, alongside Eric Morillo, Matthias Tanzmann, Butch, Point G (Live), Lauren Lo Sung and many more.

This weekend’s show has been sold out for weeks — but if you’ve not managed to grab a ticket you catch all the action via our exclusive live stream on our Facebook page.

DJ Mag’s Miami Pool Party went off as one of the wildest and wettest events at Miami Music Week yesterday at the Surfcomber on Collins Avenue in sunny South Beach.

In association with global online streaming platform BE-AT.TV, the livestream kicks off tomorrow (Friday, 23rd March) on the first day of Ultra where Carl Cox headlines his world-famous Resistance Megastructure at 10pm EDT (Saturday, 24th March, at 2am GMT).

It’s a Sunday in 2015 on the third day of UK festival Field Maneuvers, a back to basics ‘dirty little rave’ held in a eld just outside of London. Having wrapped up an afternoon where the main stage has been moved outside into the blazing sunshine, the action is shifting back under canvas, where The Black Madonna is set to warm up for Panorama Bar resident Nick Höppner and Glaswegian heroes Optimo.

This month, the DJ Mag crew is heading back to the Magic City for another round of Miami madness. To help guide you through this nonstop week of sleepless nights and endless parties, we’ve put together the ultimate Miami Music Week 2018 guide. Happy raving! 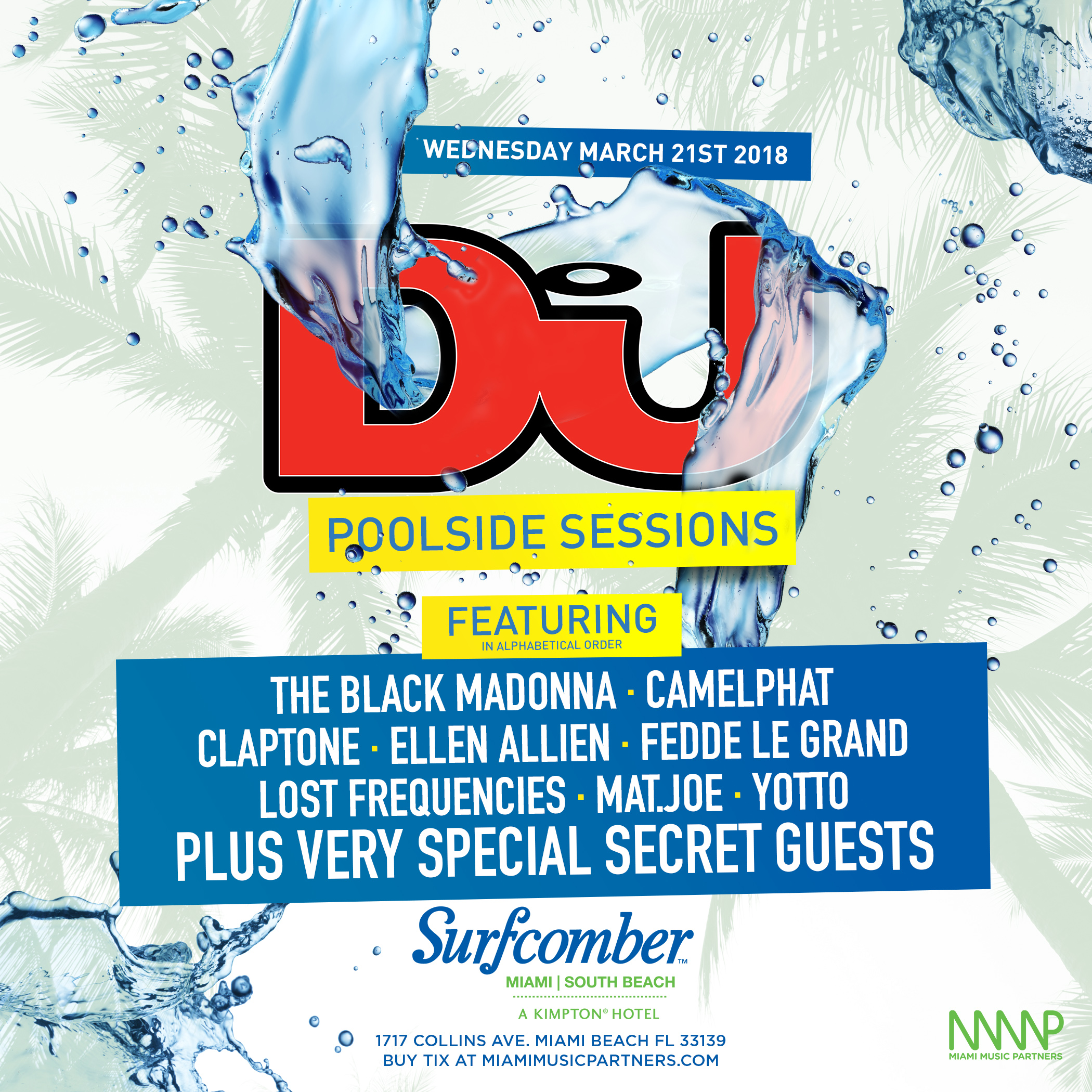 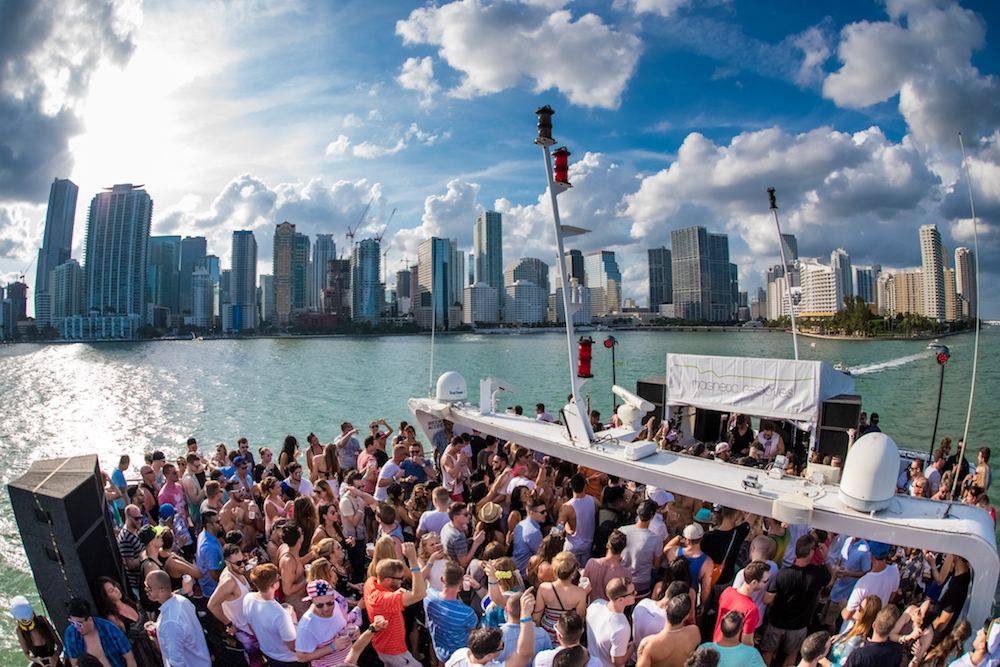 Brought to you by the team behind LIV, Story is the type of club that redefines nightlife. People travel from around the world just to experience this clubbing behemoth, and the music ain’t too bad either, with Marshmello (22nd), Black Coffee (23rd), Marco Carola’s Music On (24th) and The Chainsmokers (25th).

There’s no denying the powerhouse Mau5trap has become in recent years, and with BlackGummy b2b No Mana, ATTLAS b2b Eekkoo and Rinzen fronting the line-up, this will be a proper Miami opener. 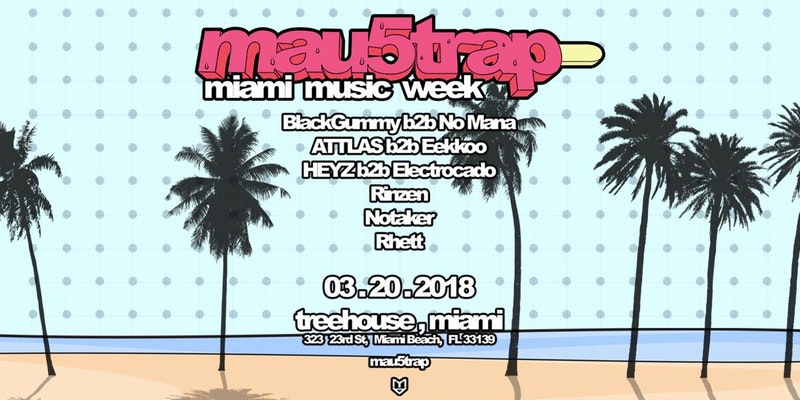 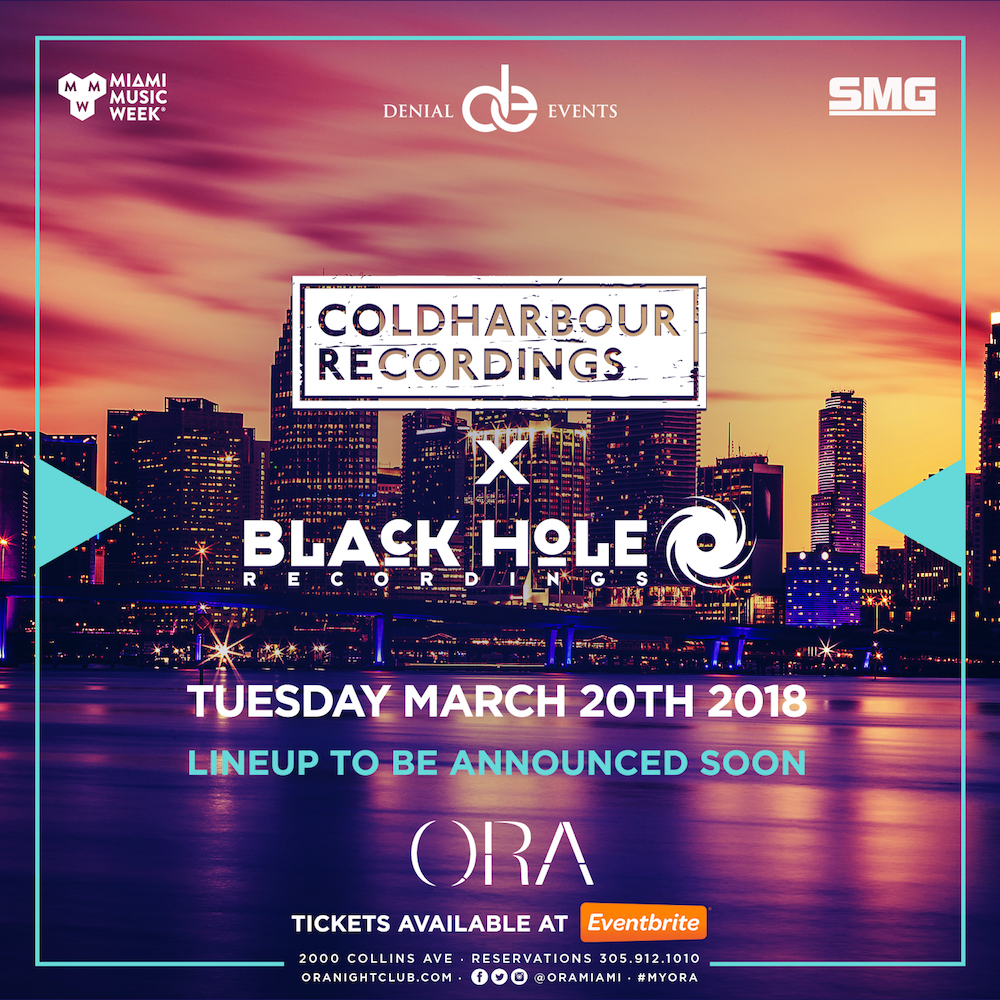 The line-up for this is yet to be announced, but with renowned Dutch duo Chocolate Puma leading the charge, we’re quietly confident it’ll be a right hoot and the perfect way to kick off the week!

Oliver Heldens’ Heldeep imprint goes head-to-head with beloved Canadian indie Monstercat, winner of the Best Breakthrough Label title in our first ever Best of North America Awards last year. Only one will be crowned king of the ring. Who will be the winner? Line-up includes Oliver Heldens, SNBRN, San Holo, DROELOE and more. 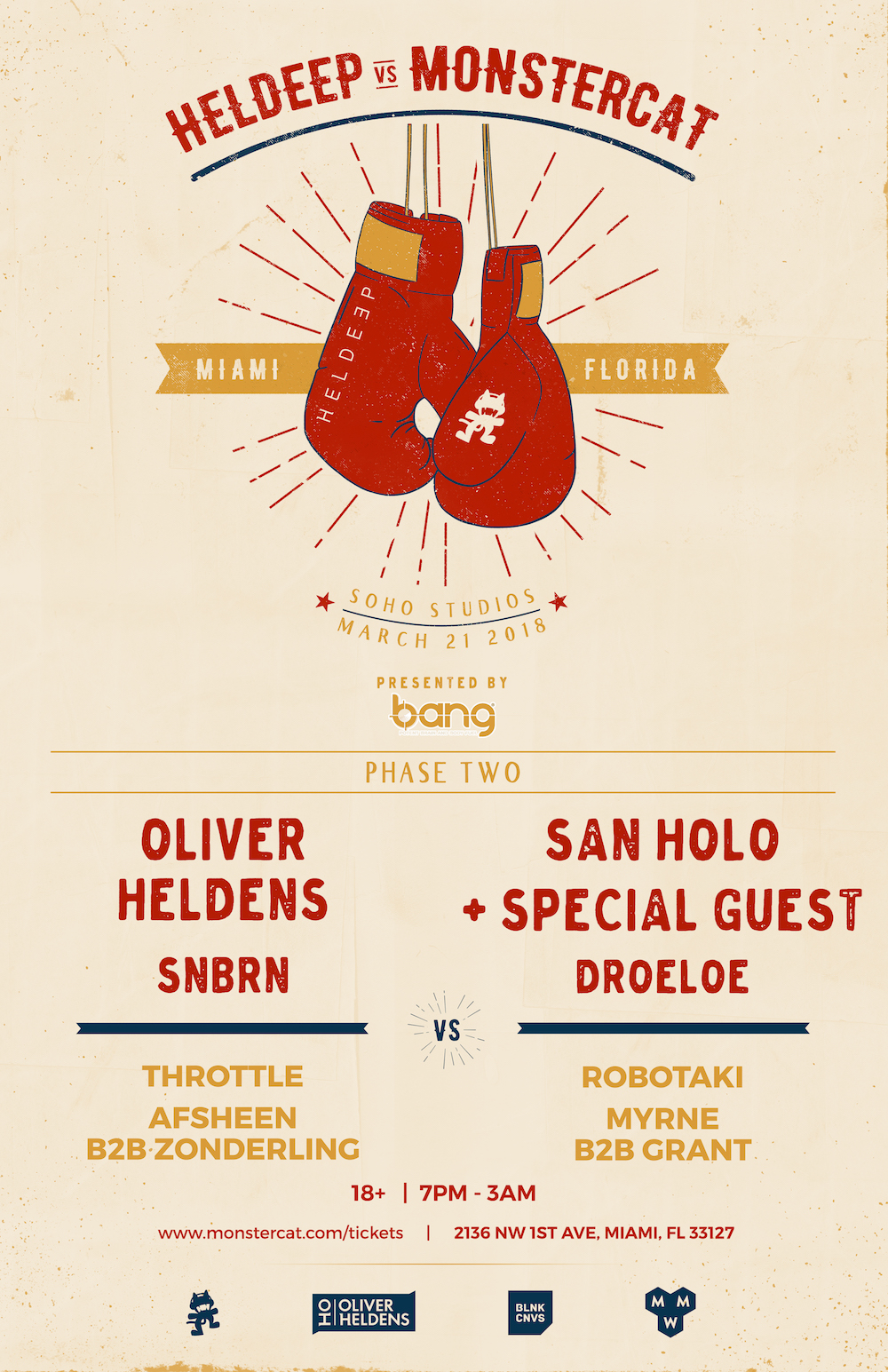 HYTE has successfully established itself as one of the most reputable party brands in the world, having hosted events in Ibiza, New York, Croatia, Italy, Beirut, Berlin and beyond. This year’s line-up features Loco Dice, Danny Tenaglia, Chris Liebing, Pan-Pot, Peggy Gou and others, so expect more techno goodness here. 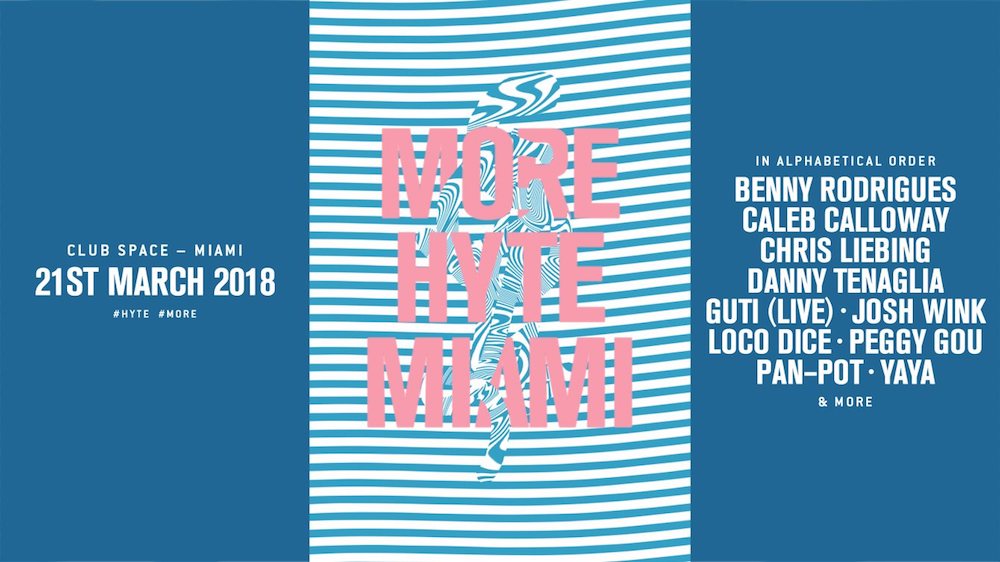 Tip-top party starters More Volume return to Trade to spoil us even further with a jam-packed line-up featuring Nick Warren, Guy Mantzur, Quivver, Kike Roldán, and more. MMW really is like all our birthdays come at once...

This motley crew of merrymakers bless Miami with their brand of nonstop good vibes house, with Billy Kenny and Maximono as the ringleaders alongside Huxley and more. It’s a can’t-miss event for house lovers who enjoy tearing up a dancefloor. 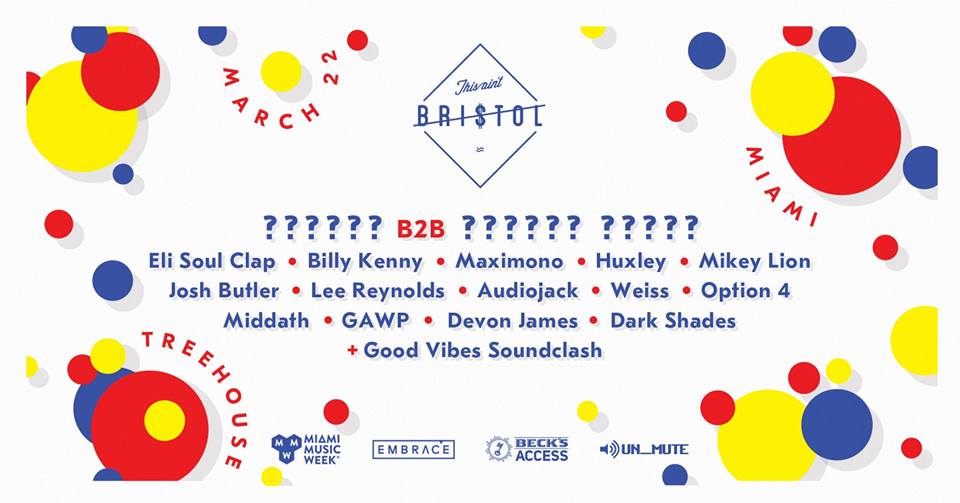 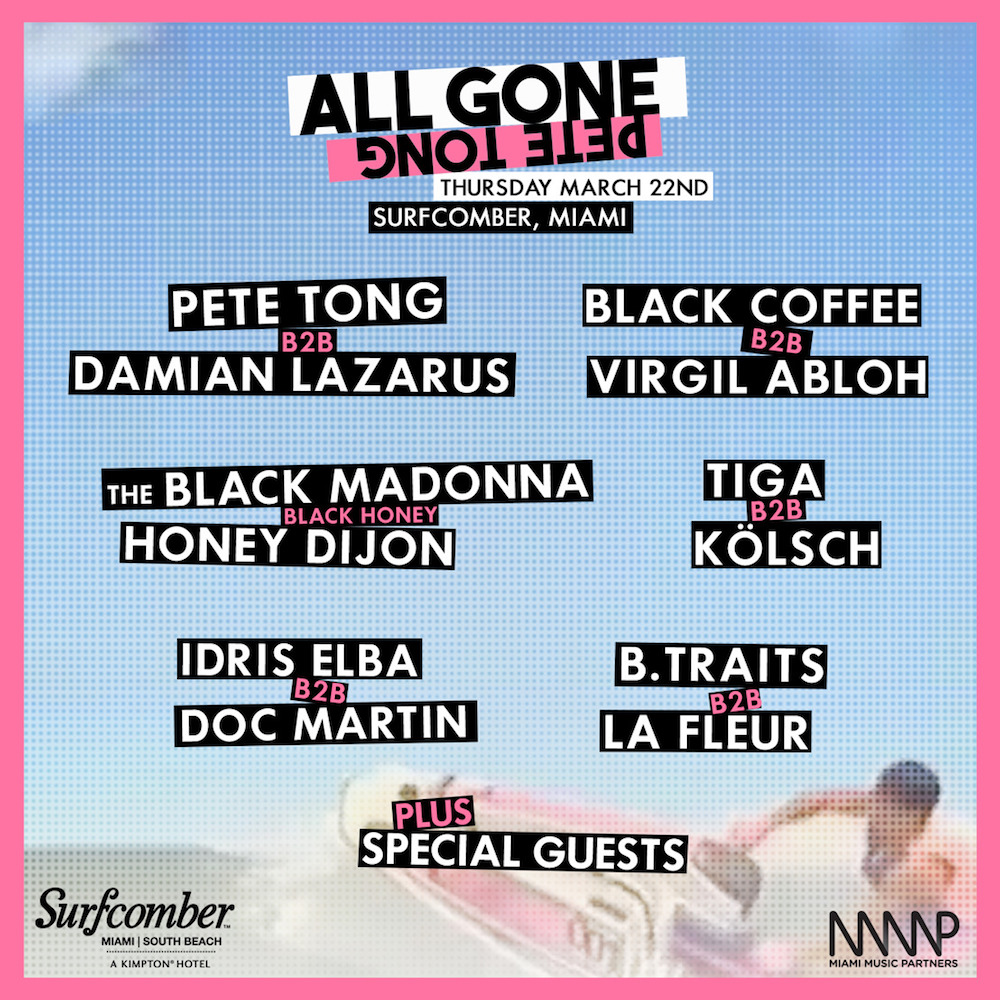 Hot Creator Jamie Jones transports the spirit of Ibiza to Miami via his beloved Paradise party, where good music is never a question and proper tunes are always expected. This year features Jamie Jones, Nicole Moudaber, Art Department, Lee Foss and many others. 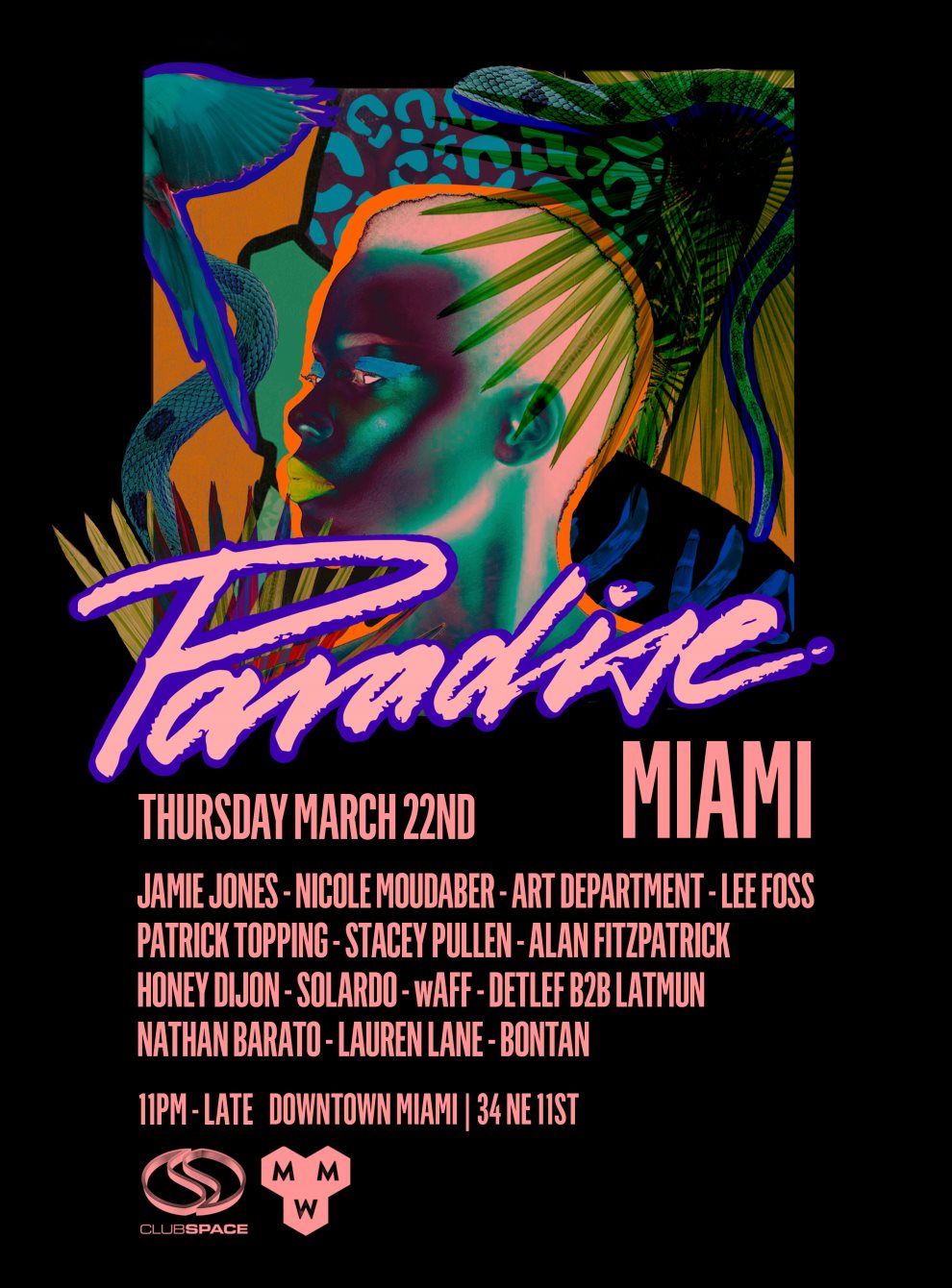 This one-day, multi-stage festival offers a much-needed alternative to the glam and gloss of Miami excess. Rapture stands out simply by combining the best in underground house and techno with its unique locale, which is surrounded by pristine beaches in a protected environmental oasis. This year’s line-up features Luciano, Guy Gerber, Art Department, Hernan Cattaneo and loads more. 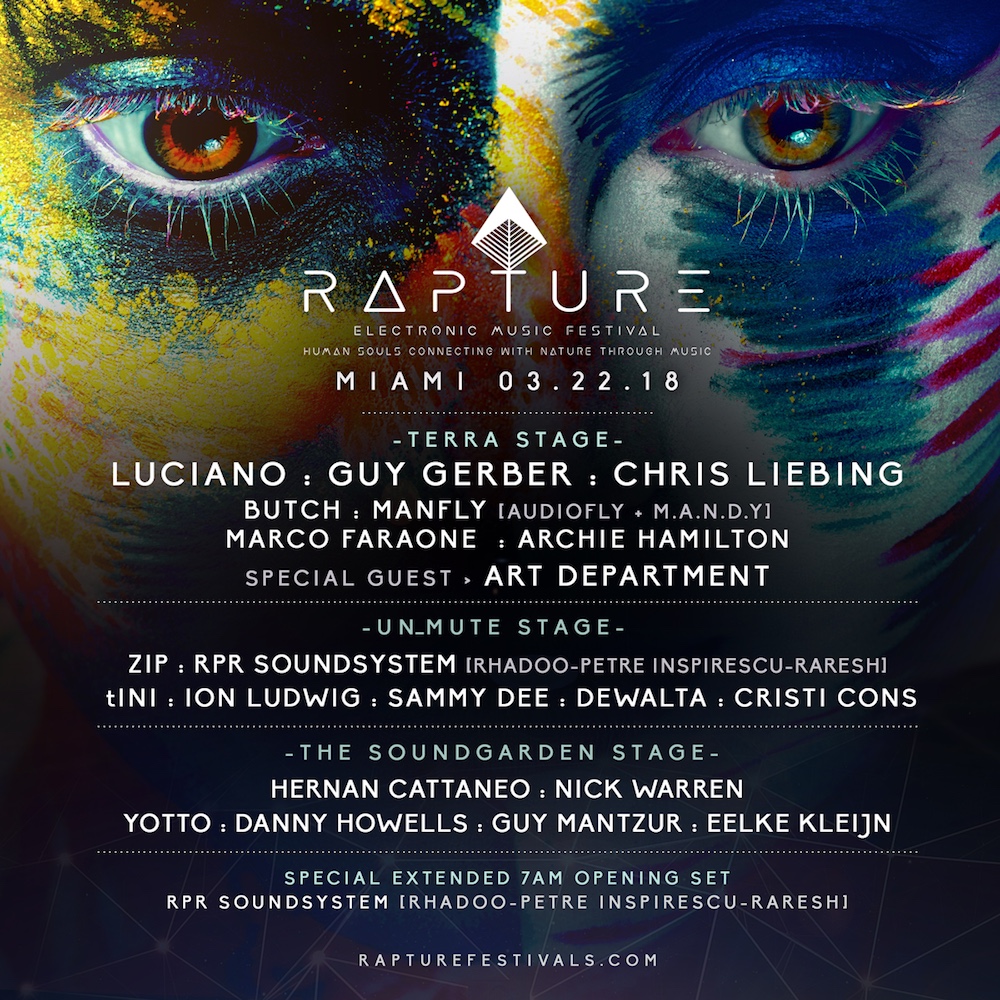 Treasure Fingers rounds up the Psycho Disco! crew for a fully stacked Miami takeover. Get down to some daytime vibes with legends like DJ Pierre and Todd Terry as well as Codes, Golf Clap, Alexander Technique, Lupe Fuentes and more. This one is also easy on the pockets: Entry to the event is free with RSVP. 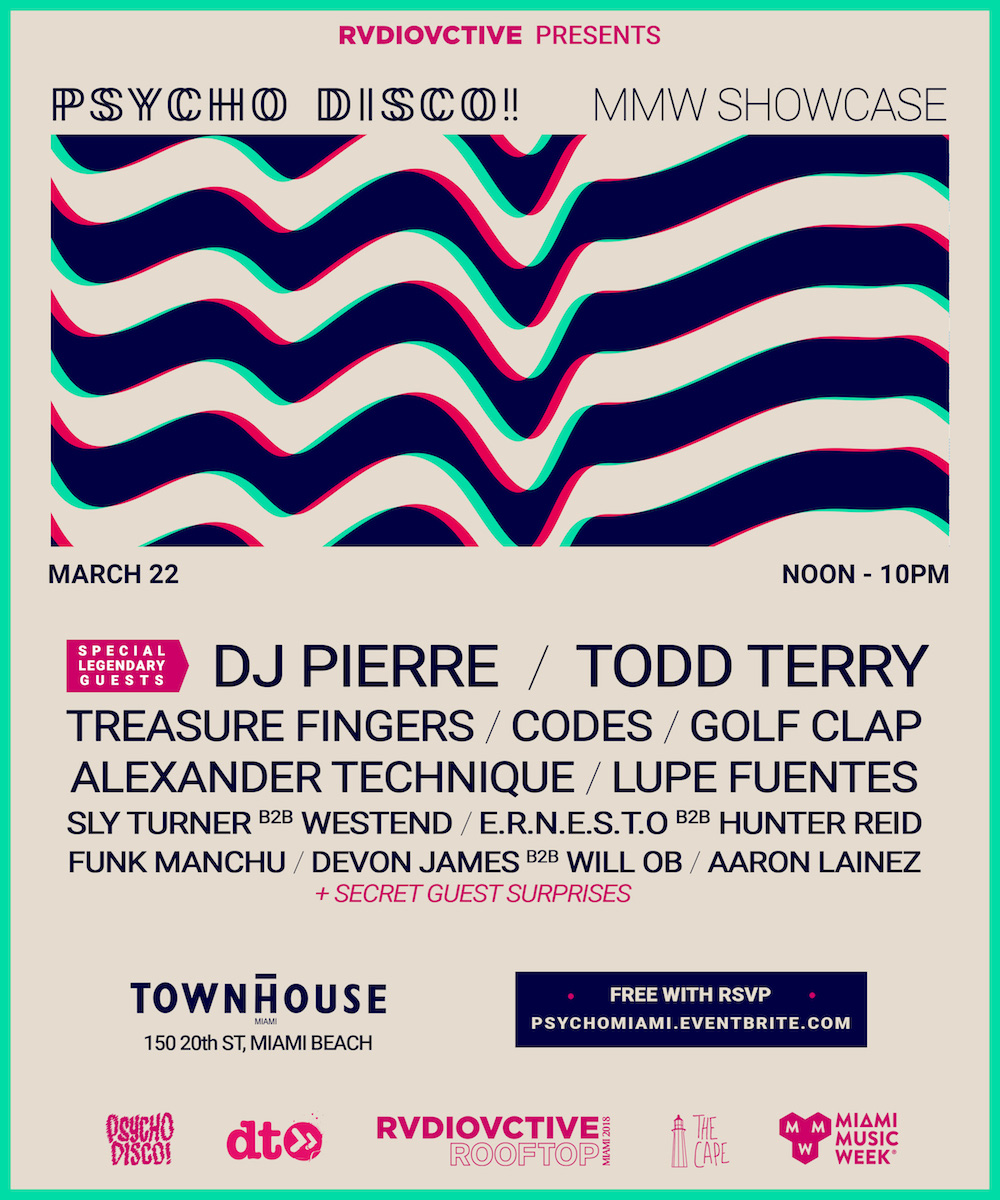 The West Coast badboys return to this massive venue for an all night soirée that goes well into the morning hours (5am), with heavy sets from Steve Aoki, special guest Carnage, Dada Life, Cheat Codes (live) and plenty more. 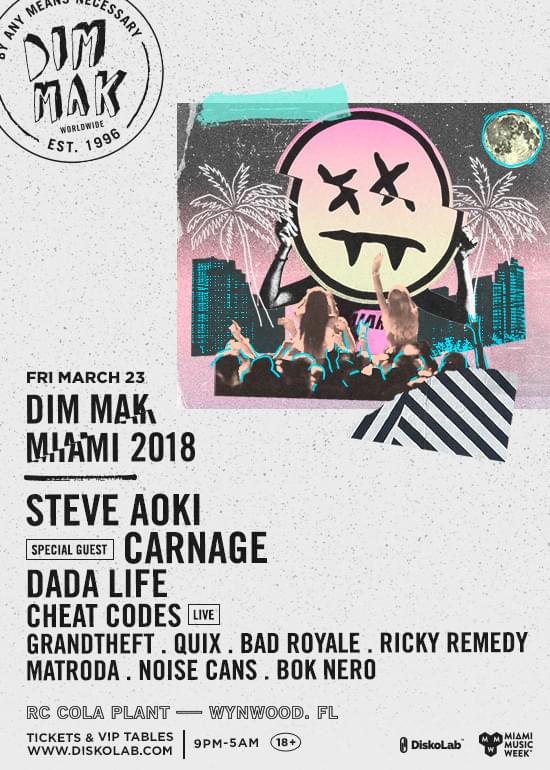 Bedouin launched their immersive Saga series in Ibiza this past summer, becoming one of the hottest tickets on the White Isle in no time. The Brooklyn duo now bring the event to Miami for a second US instalment, following an NYC debut at the end of 2017. Head here for those hypnotic Ibiza vibes. With Bedouin, &Me and more. 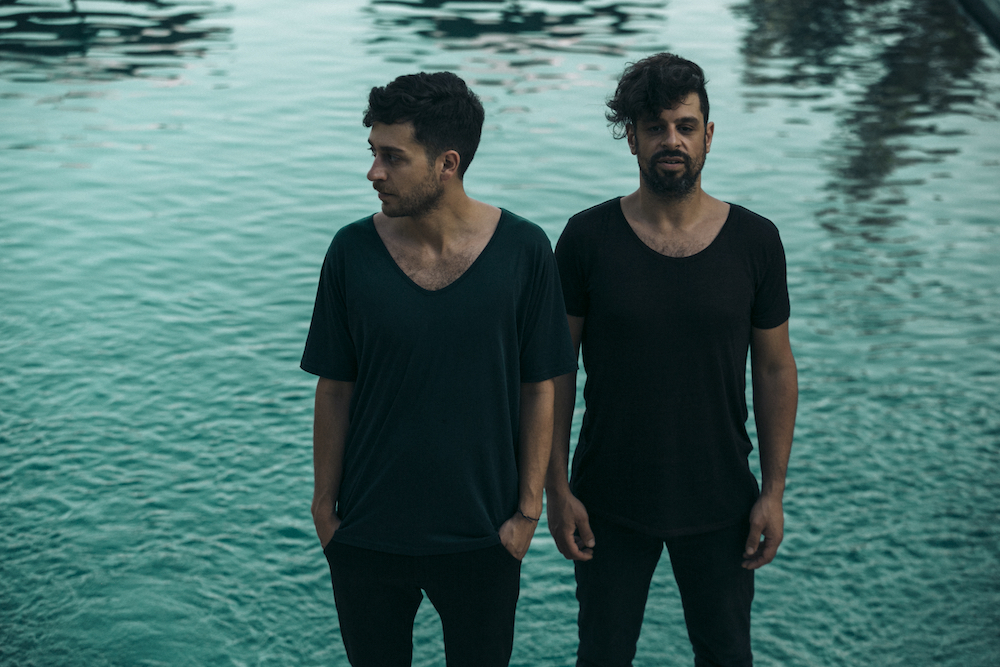 Hernan Cattaneo, Nick Warren and Kike Roldán hit Miami Beach with the freshest house beats. Not one to miss if you’re looking for a more underground vibe for your Friday night! 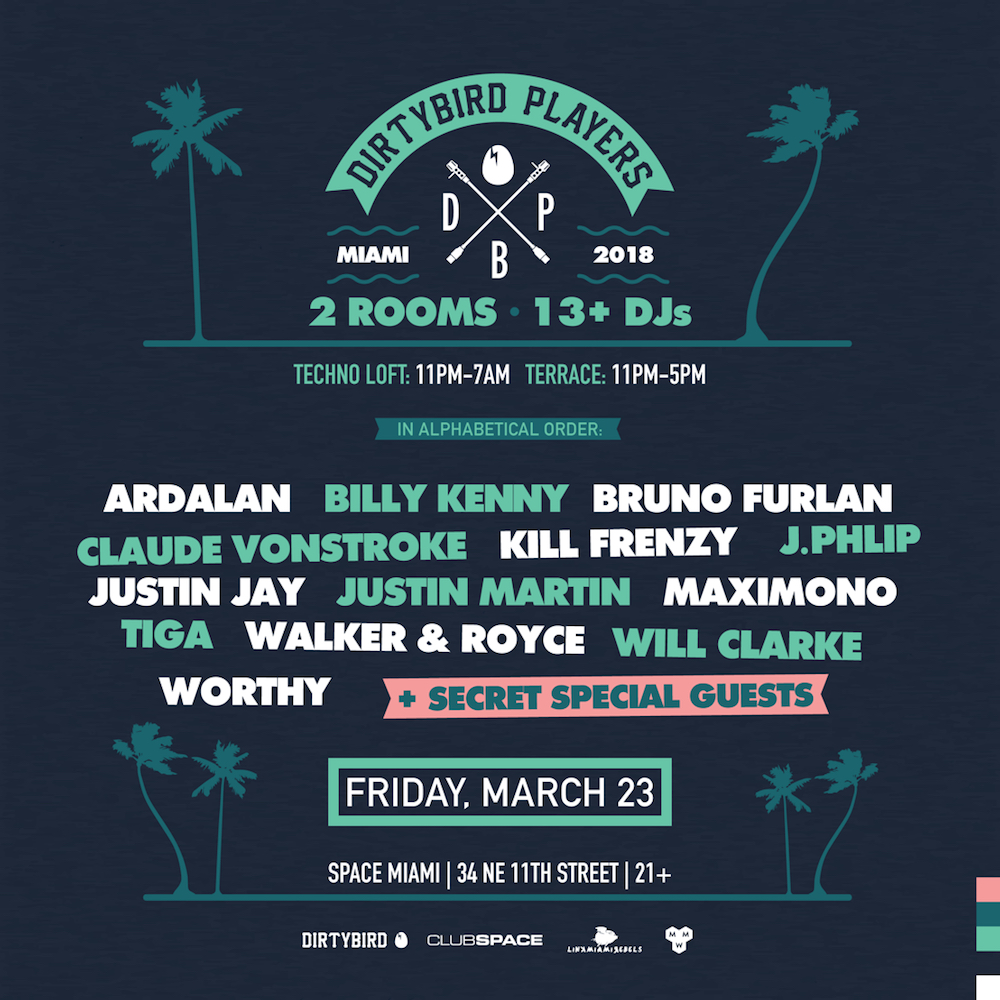 Techno don Matador brings the RUKUS with his label showcase. Line-up features the label head himself plus Eats Everything, Felix Da Housecat and Patrice Baumel. 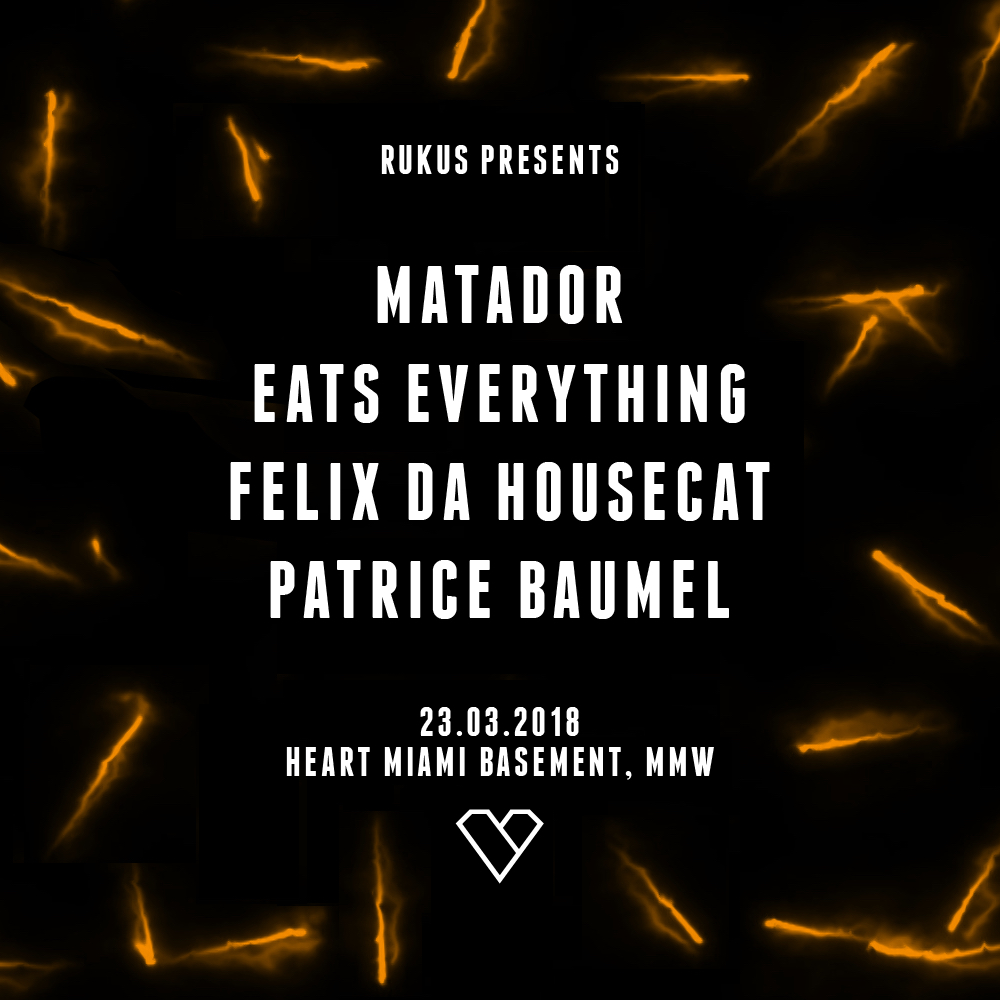 All Day I Dream of Southern Beaches
Where: 1 Hotel South Beach | Miami Beach 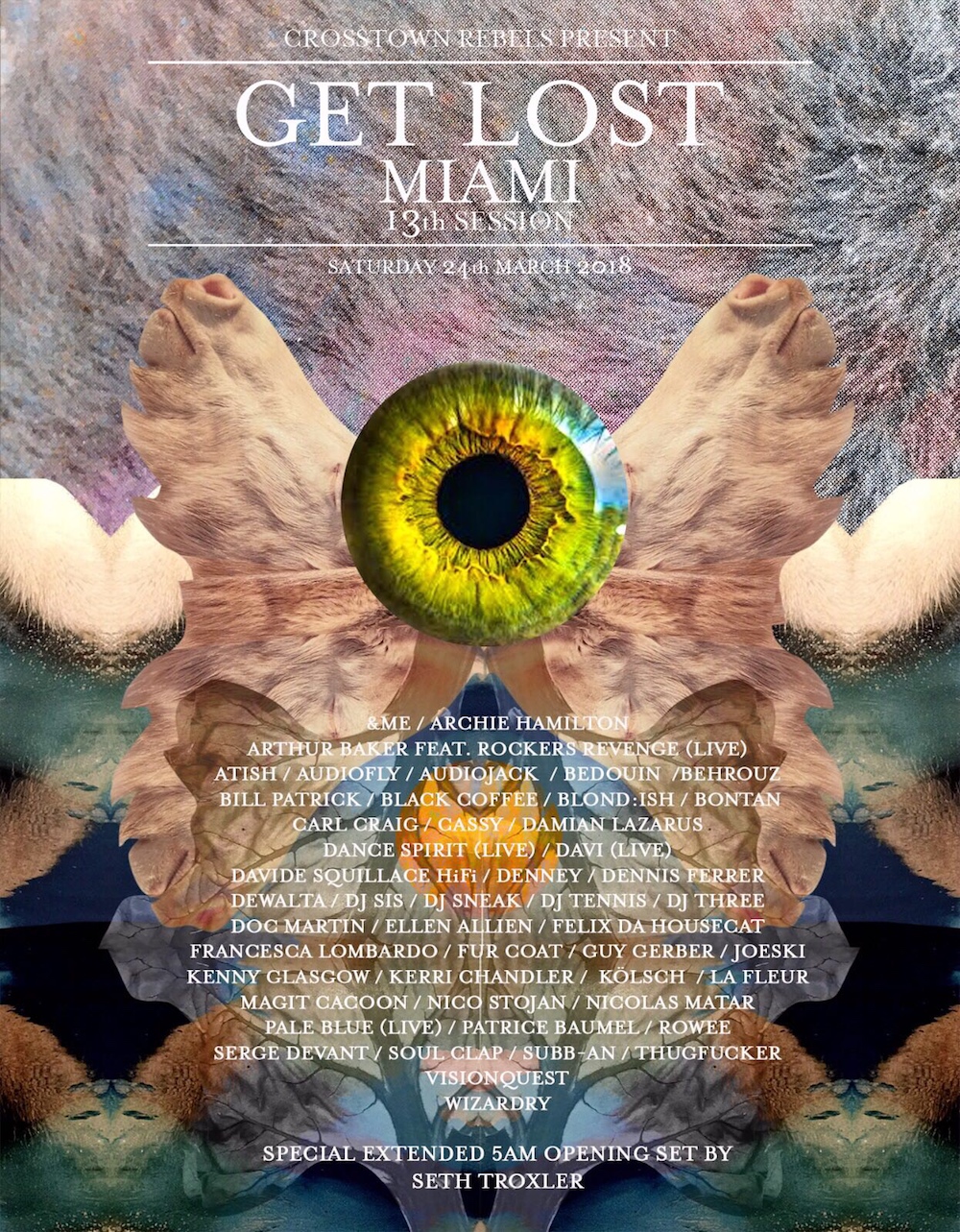 Armin van Buuren’s label comes to Miami in full swing, with some of its top talent including Firebeatz, Thomas Gold, Feenixpawl and Loud Luxury. The showcase, powered by Revolution Radio Miami 93.5 FM, promises very special unannounced guests, and since literally all the top dogs are signed to Armada, that could include anyone from Andrew Rayel to W&W to Armin himself. Ah yes, the beauty of surprise sets thrives in Miami! 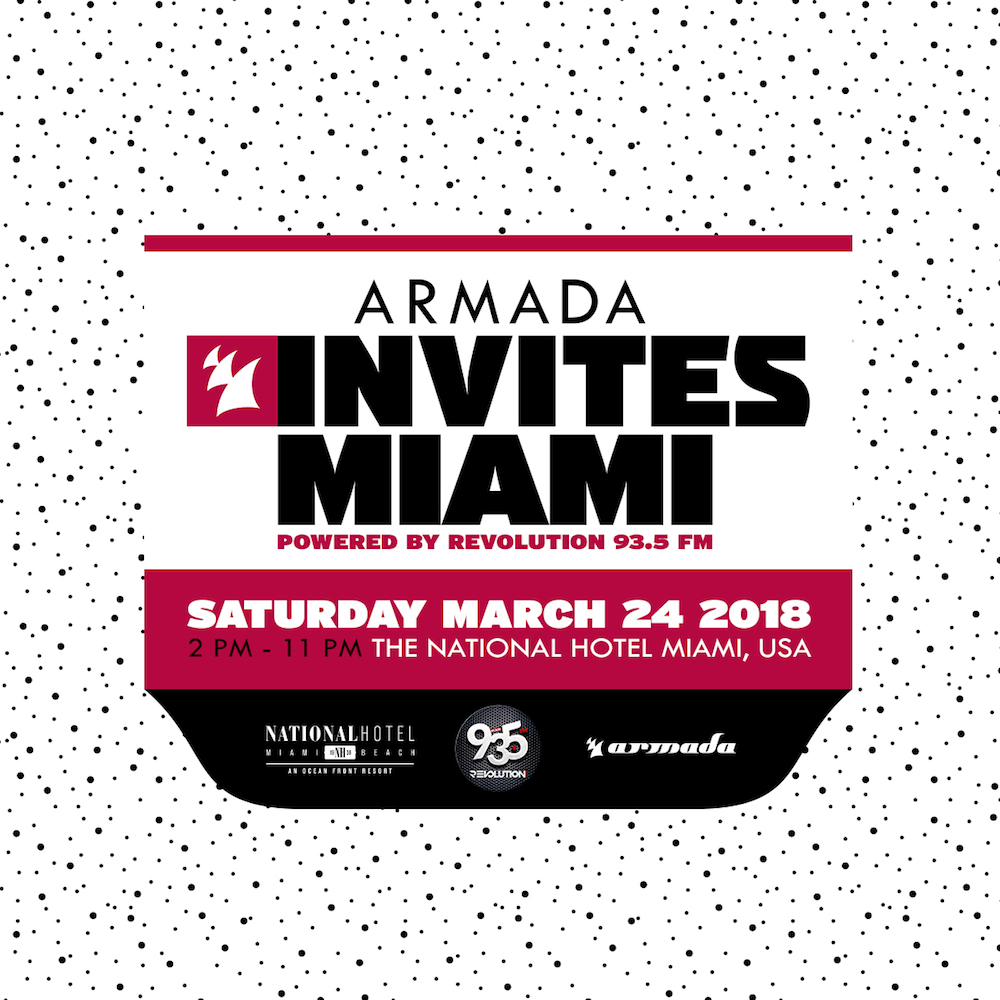 Billed as the biggest warehouse rave at Miami Music Week this year, this event pits two techno titans against one another in a massive venue. This one is sold out, so consider yourself lucky if you were able to snag tix. 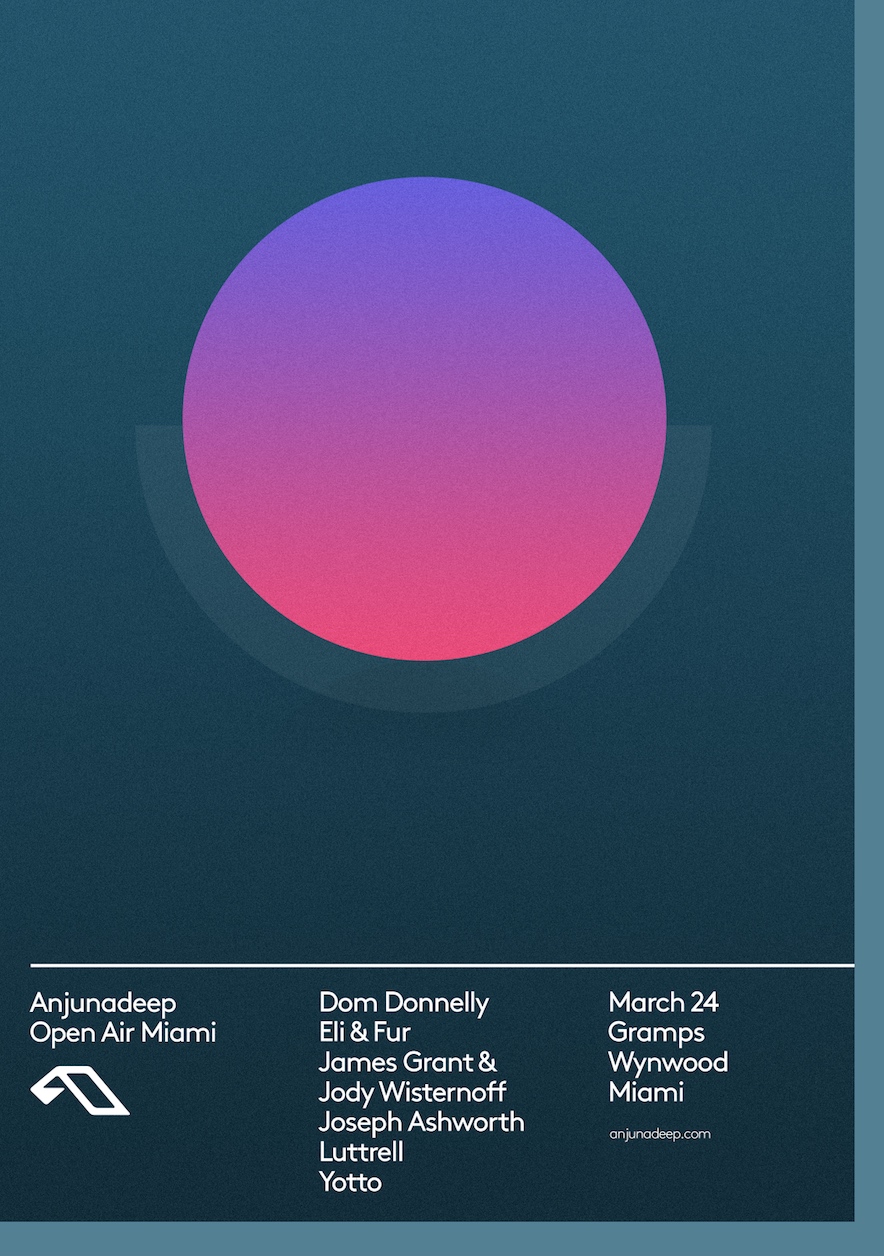 Having dominated the White Isle for well over a decade, Erick Morillo brings his Subliminal Sessions to the Surfcomber! P-A-R-T-Y!

Club Space closes out a massive week of parties with an event of epic proportions: a 24-hour party with The Martinez Brothers and Marco Carola. The night is presented by the Brothers’ Cuttin’ Headz imprint, which means you’ll get soulful house by the boatload. 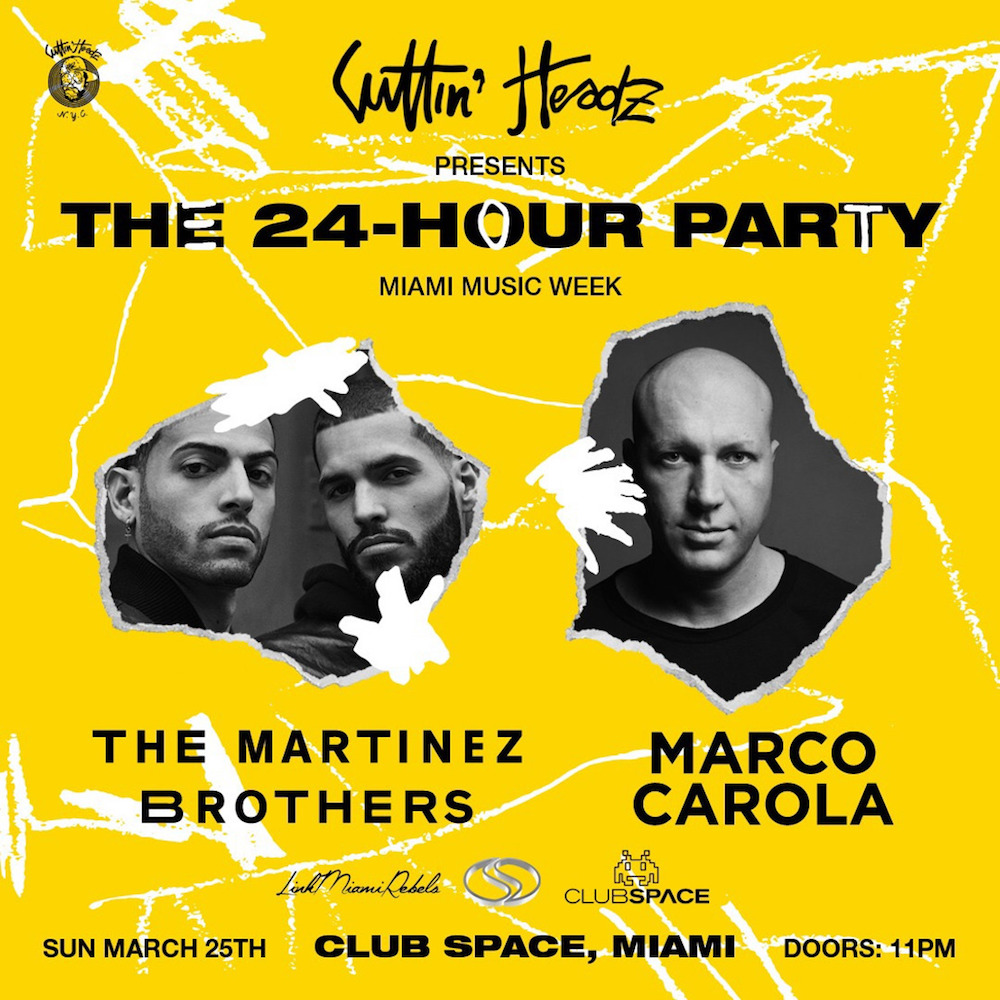 “We’re not a normal kind of two people coming together.” It’s 2pm on a Tuesday in Brazil at the height of Carnival. Olivia “Liv” NERVO has just woken up to a day’s worth of unread emails, missed text messages and countless social media notifications. 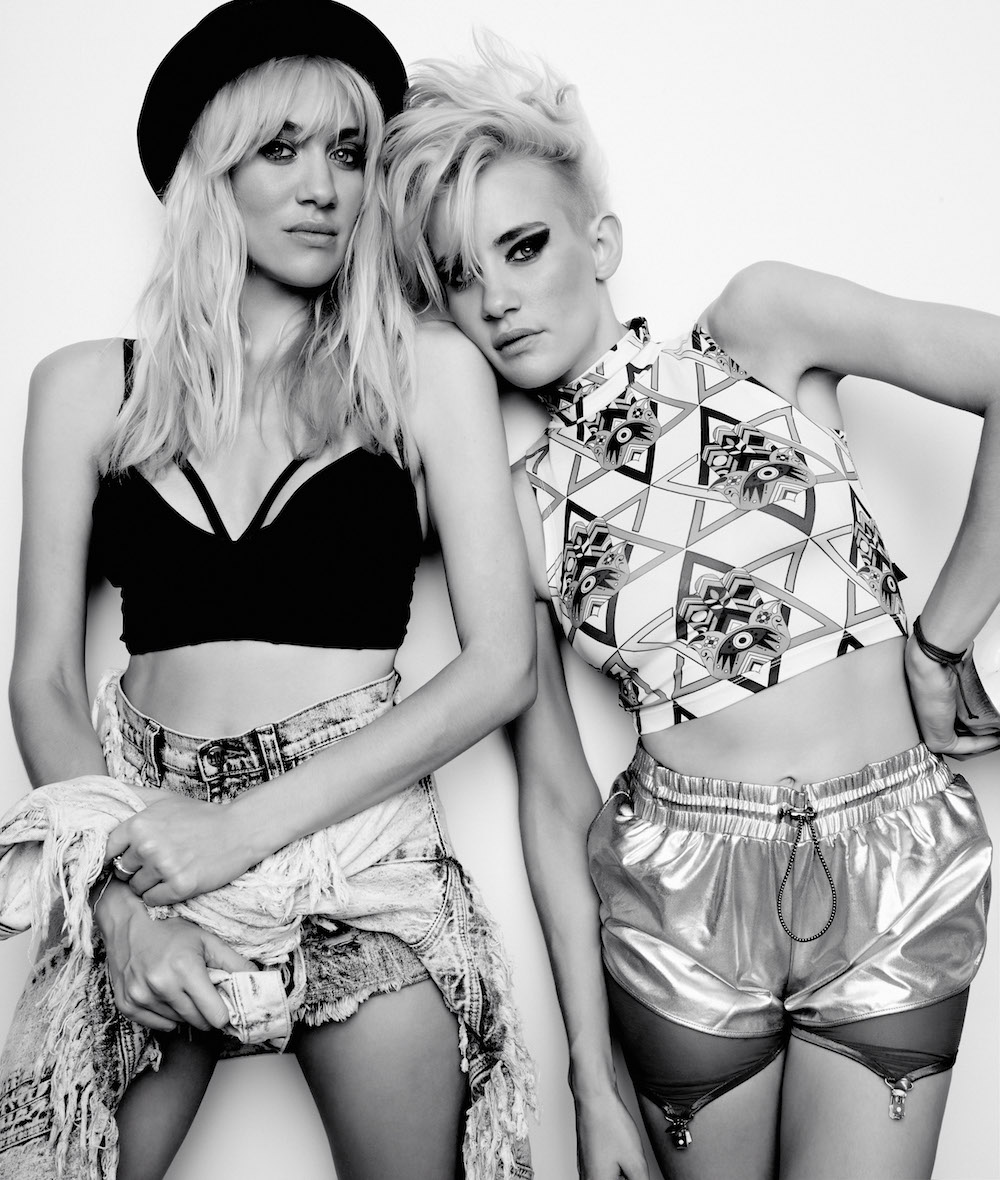 It sounds like 2018 will be the year of NERVO. Are you aiming for world domination this year?

Speaking of Fallon, you just had your first-ever late-night TV performance in America. How’d it go?
Liv: “We played on X Factor, but we DJed. [On Fallon], we were singing, we had microphones, we had dance moves.”
Mim: “And we only found out the day before that we weren’t gonna play behind a DJ booth.”
Liv: “We thought we were DJing. And we get there and they’re like, ‘Nah, we’re all singing.’ And we’re like, ‘Whaaaaat?!’” 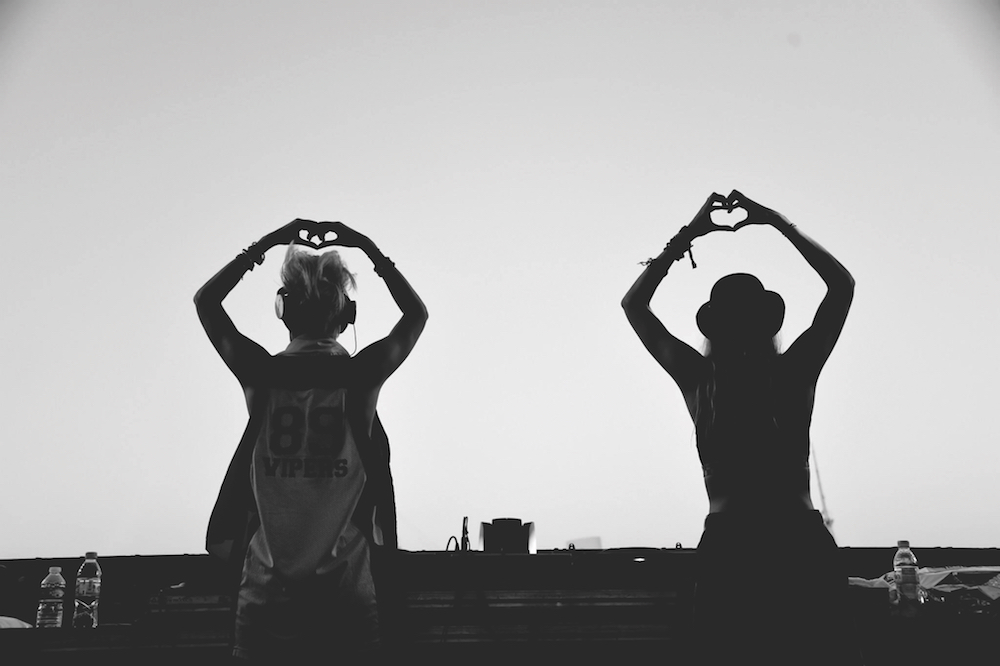 What is the role of men in all this?
Mim: “Men have to be gentlemen, as always. A good man is a gentleman. The manners make the man. It’s just up to strong women to teach weaker women, and it’s the people to be taught from young ages what respect is, what boundaries are. It’s horrible that a few men in positions of power have muddied the waters, because there are a lot of good men out there as well. So it shouldn’t be a man-hating decade or year. It should be [about] uplifting women.” 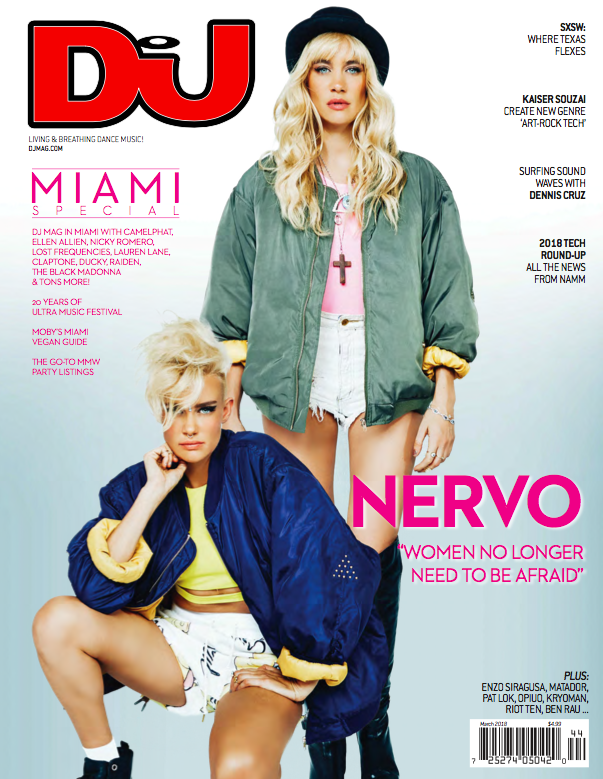 Martin Garrix, David Guetta and Brooks’ collaboration ‘Like I Do’ dropped earlier today (Thursday 22nd May) and you can listen to it below.

The track was originally played by Garrix — the man who finished in the No. 1 spot in DJ Mag's Top 100 DJs 2017 poll — during his TimeOut72 Festival set in December, attended by 60,000 people in the Indian paradise and party state of Goa.

The Zoo Project has announced it will move from Saturdays to Sundays as part of the popular club night’s forthcoming 2018 season.

The open-air festival will once again be held at ex-zoo-turned-club Benimussa Park and is set to kick off on 6th May before running every Sunday until 7th October 2018.

Deadmau5 has christened his new mini-cube DJ booth — titled the Cube 0.5 — with a spin of his orchestral remix of mega hit ‘Strobe’.

The follow-up to previous larger versions including the Cube, Cube 2.0 and Cube 2.1, the Cube 0.5 is a lighter and less cumbersome version of deadmau5’s signature LED-laden DJ booth but still boasts the same screen resolution as previous models.

The Canadian DJ/producer uploaded images of the new set-up via Twitter boasting that the fresh kit was so small it even "fits nicely" in his basement.