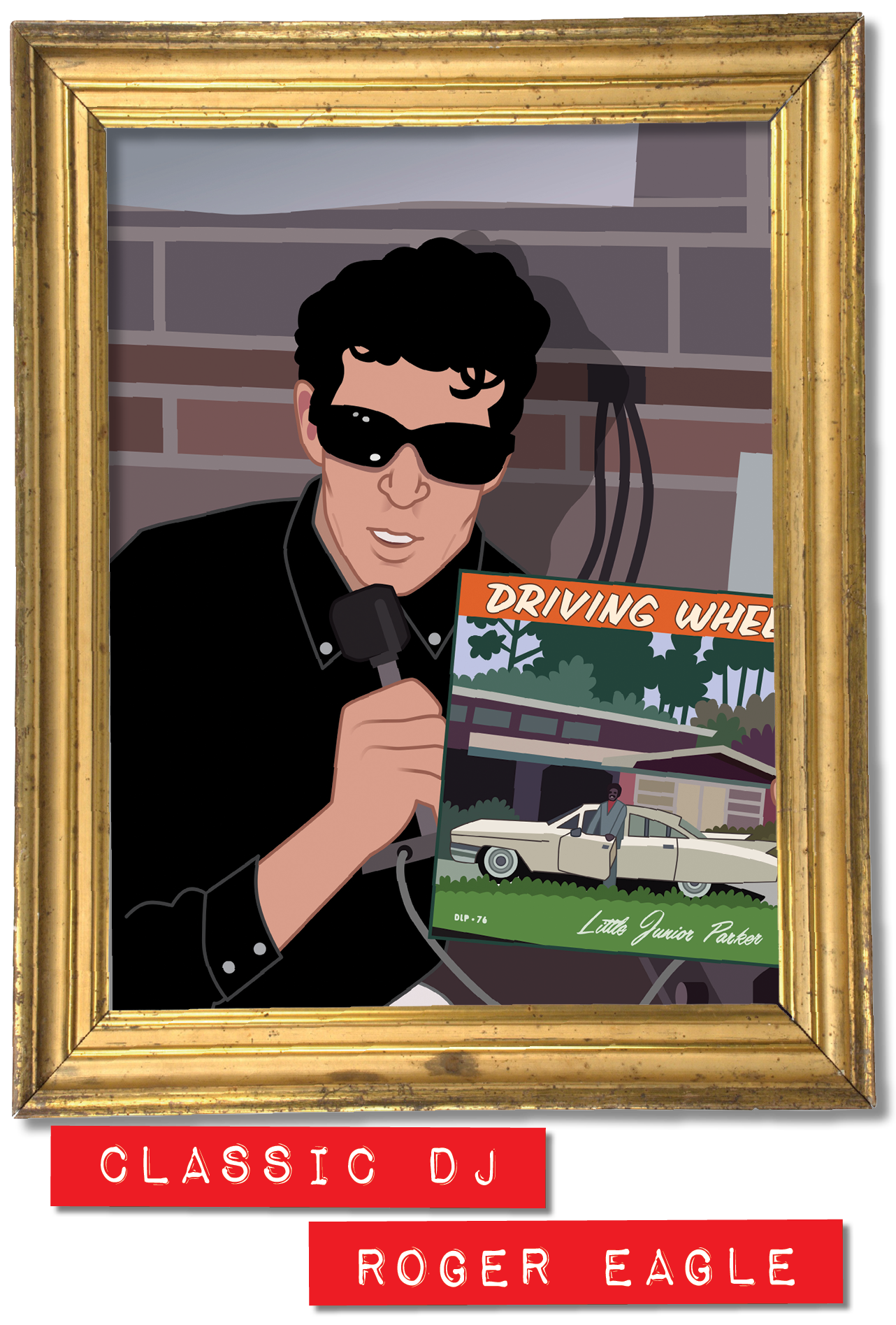 Whether the name Roger Eagle is familiar or not, he was one of Britain’s most influential DJs ever. Without this Oxford-born vinyl obsessive, both Manchester and Liverpool’s cultural heritage would be substantially poorer. He was a musical maven who made so much happen in ‘60s Manchester and ‘70s Liverpool; there, right in the midst of things, at a series of crucial moments spanning the eras of the mods, the hippies and the punks.

As a DJ, along with Guy Stevens at The Scene in London, he was a pioneering force - an early importer of American black music, who’d produce his own trailblazing magazine R&B Scene. He also introduced Manchester to a whole array of legendary live blues, R&B and soul performers.

Eagle’s early-mid ‘60s residency at the Twisted Wheel’s original Manchester home in Brazennose Street set the foundations for what would later become the Northern soul movement, which fermented at the subsequent Whitworth Street location. Ironically, Eagle questioned the scene he laid the groundwork for, feeling the drugs had a negative and homogenising affect on the music played.

Following a move in a more psychedelic direction at Manchester’s Magic Village later in the decade, the ‘70s took him to Liverpool where he promoted concerts at The Stadium, bringing in artists including David Bowie, Led Zeppelin, T. Rex, Lou Reed and his own personal idol Captain Beefheart. Jamaican dub would also prove to be a great enduring love.

The Stadium shows would lead to him opening Liverpool club Eric’s (1976-1980) with partners Pete Fulwell and Ken Testi, across the road from where The Beatles played so many times at The Cavern on Mathew Street. A whole new Liverpool scene would be born of Eric’s, key to the emergence of a number of artists including Echo & The Bunnymen, The Teardrop Explodes, Dead Or Alive, Wah! and Frankie Goes To Hollywood.

An imposing character, Eagle was a vinyl evangelist in the truest sense of the term, compelled to spread the word whether he was DJing, promoting or simply playing records to an individual in his home, bestowing his musical wisdom via the grooves of the records he chose.

In 1999, having ended up living in Bangor in North Wales, Eagle succumbed to cancer, aged 56. His legacy was finally brought into fuller focus via the 2012 Bill Sykes book ‘Sit Down! Listen To This!’, which helped shine some light on the true gravitas of this cultural colossus. BBC Radio 4’s half-hour documentary, ‘Roger, the Eagle Has Landed’, first broadcast on New Year’s Eve that same year, built upon the new interest the book had prompted. 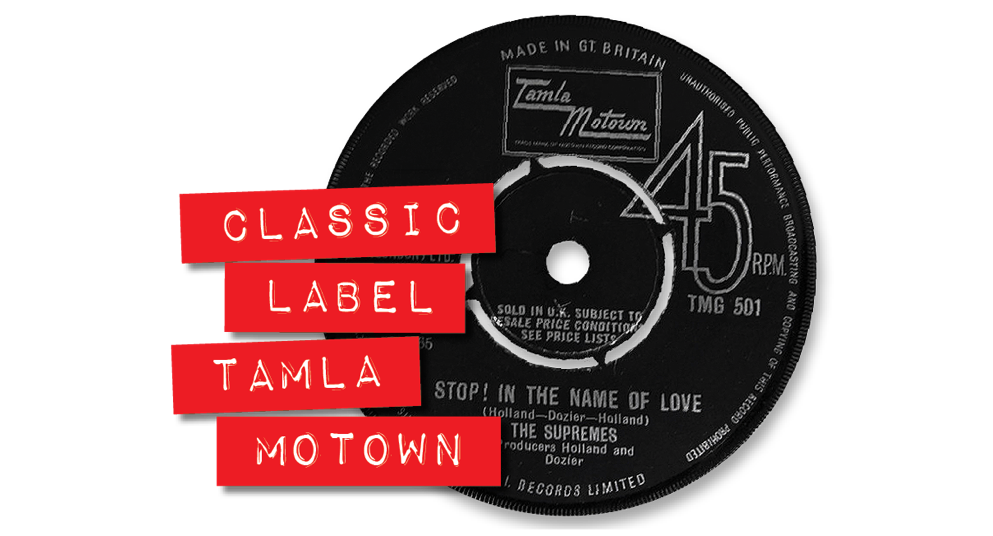 Few record labels can claim to have influenced British popular culture to the level EMI-launched Tamla Motown did. Providing a catch-all UK identity for a number of Berry Gordy-owned US labels, it propelled R&B and soul into the heart of British consciousness, playing a pivotal part in both the mod and Northern soul movements. It was, in essence, the original discotheque music, instrumental in evolving the ‘70s disco direction.

Gordy founded his company in Detroit, Michigan in 1959, Barrett Strong's ‘Money (That's What I Want)’ providing a debut hit that same year, reaching #2 on the US R&B charts. Their first million seller was The Miracles’ ‘Shop Around’, a #1 R&B hit that just missed the top spot of the pop chart.

Based in the property that became known as Hitsville USA, Gordy applied Detroit’s car production-line mentality to the company’s music/artists, with the Funk Brothers as their formidable house band, playing on numerous classics including ‘My Girl’, ‘Reach Out, I’ll Be There’, ‘I Heard It Through The Grapevine’, ‘The Tears Of A Clown’, ‘What’s Going On’ and ‘Papa Was A Rollin’ Stone’. They’d also enjoy the writing and production of visionaries like Holland-Dozier-Holland (Lamont Dozier and brothers Brian and Eddie Holland) and Norman Whitfield. Motown became a byword for hits, so much so that it was vaunted as ‘the sound of young America’.

Initially issuing records in the UK on the London American, Fontana, Oriole and Stateside labels, Tamla Motown was established in 1965 thanks to lobbying from the Tamla-Motown Appreciation Society head, Dave Godin (who’d later coin the term Northern soul). The label began releasing music from imprints including Tamla, Motown, Gordy, Soul and V.I.P. Its popularity was helped by the legendary ‘Motown Revue’ tour that year, which brought The Supremes, Stevie Wonder, Martha & The Vandellas and Smokey Robinson & The Miracles to UK shores.

Unleashed in 1967, the ‘Motown Chartbusters’ compilation series was hugely influential, the first eight releases all reaching the top 10 of the UK album chart, three topping it. Further to the aforementioned, household names included Marvin Gaye, The Temptations, Four Tops and The Jackson 5.

‘60s Motown, along with other US soul treasure troves Stax and Atlantic, majorly influenced the mods, but also underpinned the Northern soul sound that would reach its heights during the ‘70s. An extremely rare copy of Frank Wilson’s only Motown recording (on Soul), 1965’s ‘Do I Love You (Indeed I Do)’ sold for £25,000 in 2009.

Tamla Motown re-branded simply as Motown in 1976; a new era of continued success commencing for the company, which had moved operation to Los Angeles in 1972. 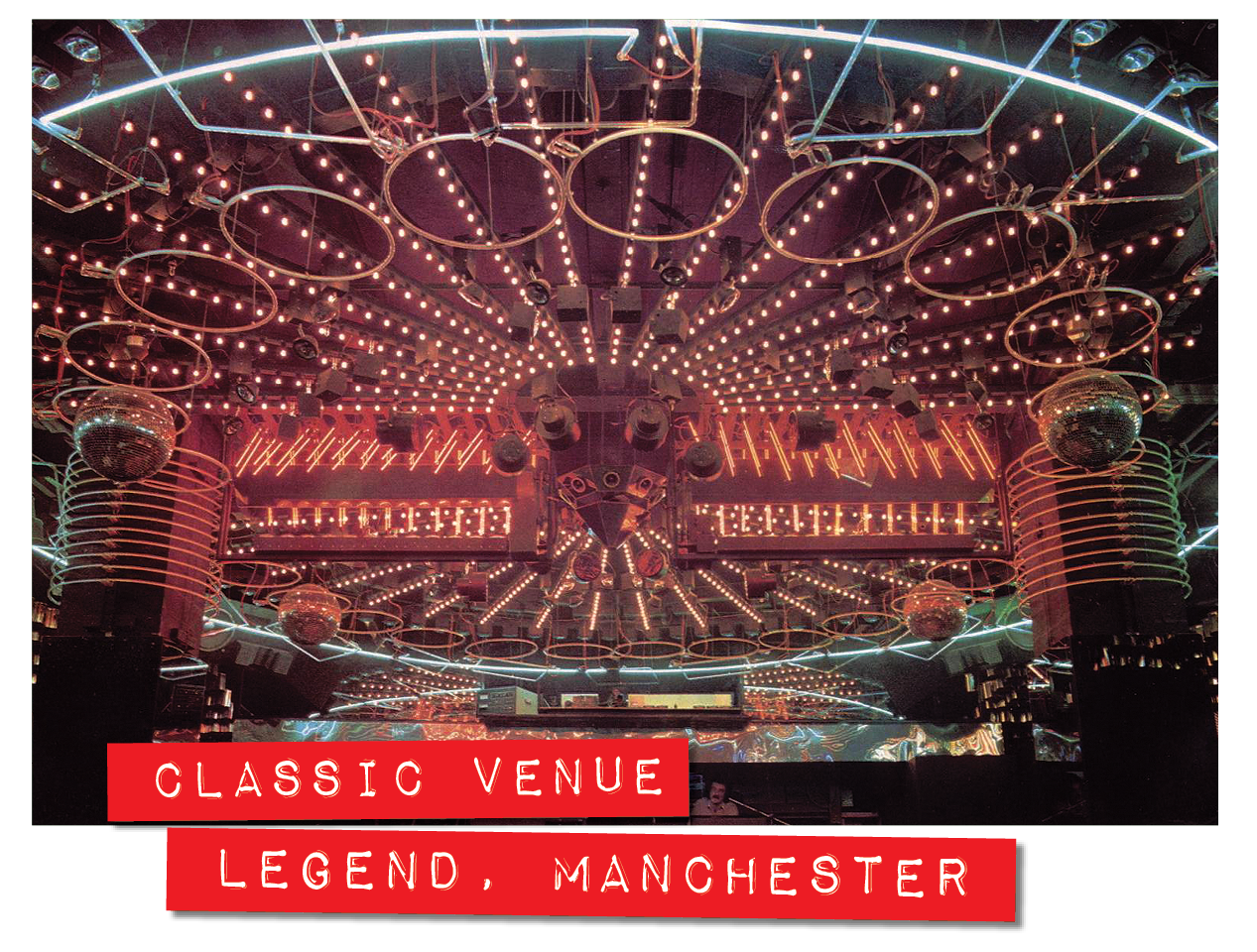 Legend might be described as Manchester’s other club of the ’80s - an influence on The Haçienda, which brought global attention to the city’s club scene later in the decade.

Opened in 1980 by Lennon’s Leisure, who owned the nearby Wigan Pier, a state-of-the-art US-styled venue, Legend (or Legends as it was often referred to) took things a stage further, housing arguably the best sound and lighting in the country when it launched.

The club’s original resident was Nicky Flavell, who’d previously been at Wigan Pier (I was his successor there). Having cultivated a successful midweek jazz-funk night at The Pier, the company set about doing the same on Wednesday at Legend, initially under Flavell’s stewardship, and subsequently John Grant’s.

The night initially flourished, but nosedived in attendance when Grant left to take over another midweek night in Manchester, the Blues & Soul/Piccadilly Radio promoted Main Event at Placemate 7. In consequence, I was offered the opportunity to try to salvage the Wednesday.

The club’s Thursday alternative/futurist night, had taken off in a big way in 1981, with new residents Paul Rae and Ralph Randell at the helm. The Dancematic night, as they called it, attracted many of what would later become the original Haçienda crowd, following its May ’82 opening.

As 1982 unfolded, a new Electro-Funk direction gained momentum, crystalized by the seminal release of Afrika Bambaataa & The Soul Sonic Force’s ‘Planet Rock’. With Legend boasting three Technics SL-1200s, the first I’d come across in a UK club, I’d placed the emphasis on New York-style mixing, yet to make its impact with all but a small minority of British DJs; the microphone still widely used.

I’d found myself in the ideal environment to anticipate these changes, playing cutting-edge US dance imports to a knowledgeable young and predominantly black audience who, like myself, wholeheartedly embraced these changes, although the scene’s purists were resistant, dismissing Electro as computerised nonsense.

These factors combined, the night taking off in a major way with Legend hitting its 500 capacity each week; people travelling in from all over the North and Midlands, and even as far as London. Following my ‘82/’83 tenure, the tradition of black/dance music at Legend continued throughout the ’80s, with DJs like Stu Allan, Colin Curtis, Chad Jackson and Mike Shaft having residencies at one point or another. The famous London acid house party Spectrum also held their Manchester events there at the height of the rave era, whilst the Happy Mondays recorded the videos to both ‘Wrote For Luck’ (1988) and ‘WFL’ (1989) in the club. 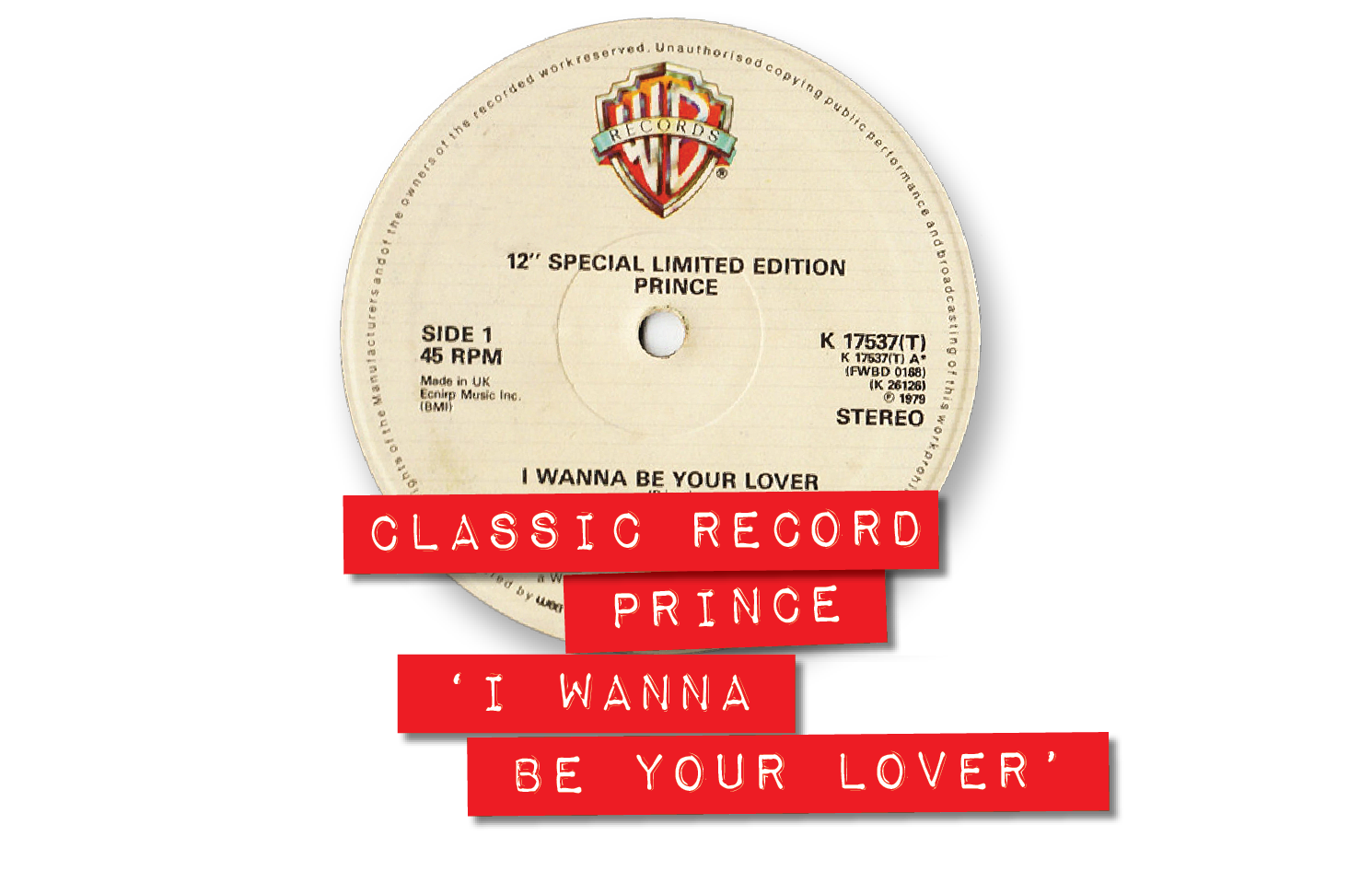 Born in 1958 Minneapolis, Prince Rogers Nelson grew up in a musical household. His father, whose name he inherited, was a pianist and songwriter, whilst his mother was a jazz singer. He mastered many instruments at a young age, joining a band called Grand Central in his early-teens.

His debut LP, ‘For You’, was released on Warner Bros in 1978, things really taking off with his self-titled ‘79 follow-up, a million-seller that marked him out as a soon-to-be superstar. The choice cut was ‘I Wanna Be Your Lover’, which scored big in the US – reaching #1 R&B, #2 Disco (listed with ‘Sexy Dancer’) and #11 Pop.

It was later revealed that the lyrics were inspired by jazz/soul pianist/singer Patrice Rushen, who he’d developed a crush on when she programmed some synthesizers for him. He offered the track to Rushen, along with another inclusion from the ‘Prince’ album, ‘I Feel For You’ (a UK #1 and US #3 for Chaka Khan in ’84), but she turned them down, scoring her own big hit with ‘Forget Me Nots’ in 1982.

His sixth album, ‘Purple Rain’, featuring music from the 1984 movie in which he starred, catapulted his career to new heights, going on to become a multi-platinum triumph - the third best-selling soundtrack of all time. He subsequently founded his own Paisley Park label in 1986.

A reclusive character, busy behind the walls of his Paisley Park enclave, Prince rarely gave interviews and in the early-‘90s changed his name to the unpronounceable ‘Love Symbol’ following a contractual dispute with Warner Bros.

In 2007, French electronic duo Justice sampled ‘I Wanna Be Your Lover’ in their track ‘Genesis’, whilst DJ Dimitri From Paris’ 2011 edit (released as ‘I Wanna Be Your Lobster’ by Dimitri From Stoke-On-Trent), combined live and studio recordings, quickly becoming a firm favourite via the re-edits scene, frequently heard delighting the crowds at festivals and in clubs.

Over an incredibly prolific career, Prince sold over 100 million records worldwide, as well as winning eight Grammy Awards, a Golden Globe Award and an Academy Award for film title-track ‘Purple Rain’. He was inducted into the Rock and Roll Hall Of Fame in 2004.

He died in 2016 of an accidental overdose of fentanyl, an opioid pain medication.