How I Play Live: dOP | DJMagAdmin.com Skip to main content

How I Play Live: dOP

How I Play Live: dOP

As electronic music and live performance continue to intertwine, our new series explores how some of the best artists take their studios on the road and what it means for the future of clubbing…

Why was it important to you to develop a live show over just DJing?
"We initially didn't even involve DJing in our sets, we actually started out as a band, and DJing came later. Playing our music live on stage is natural, but since starting DJing some years ago, it's been a real pleasure. After all these years of playing your own music, it feels amazing to now connect and play the music of other people. It's been important to completely fulfil the picture of dance music."

How did you initially intend your setup to work?
"Initially we were influenced by the setup of Noze, and the way they started to play live more than 15 years ago. With the emergence of Ableton, new possibilities arose, especially with a good mixer, some instruments and analogue machines. By using a good quality setup you’re avoiding troubles. We were also definitely influenced by live artists such as Ark, Jamie Liddell or Mathew Jonson."

How has the setup changed over time?
"It’s incredibly similar to what it was before, now with more machines. The technical evolution of stable analogue live gear is awesome right now, so we have a lot of fun with new instruments like the Kastle and the Softpop from Bastl instruments, or the Lyra 8 from Soma – a very interesting Russian brand. Since we started, a brand like Arturia is providing amazing devices to synchronise and sequence many more devices at the same time. It has definitely become easier, and the amount of new interesting devices being introduced is constant. We can always replace certain pieces of tech so it always makes our performances more stimulating every time. But in essence, the core of our set-up has remained the same: Computer, soundcard, mixer and microphone." 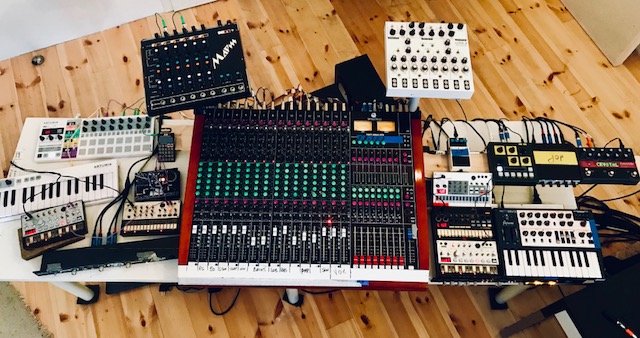 What are the challenges when including a vocalist in live electronic music?
"First finding the right sound, then EQing it to avoid feedback. Then where we place the monitor. We prefer to play on smaller stages, but it’s not always possible as every club has their own setup, and different ways which they place their monitors and system.

"We now also use a little compressor for the peaks. It can be very difficult when there's a limiter, we have had some real traumatic experiences in the past! We don't use any playback, so the voice has to find the right place. There aren’t many other groups who have live vocalists in our scene, so yes, it is a challenge, but I guess it's what makes us different."

"There aren’t many other groups who have live vocalists in our scene, so yes, it is a challenge, but I guess it's what makes us different"

What’s your setup now and how does it work?
"The setup is controlled by the computer that is linked with all our devices. We always play live with Ableton and we use a Midas Venice mixer, with at least 24 channels going.

"We use a bunch of [Korg] Volca instruments, and many Arturia tools like the Beastep, Keystep and their Microbrute. We bring some strange instruments like this Kastle, Softpop and the Lyra 8, plus a friend of ours built a fat analogue siren for us. We bring our signal through an analogue filter from Vermona – that reproduces the filter of a DJ console. We were missing this function for years, and master filters are part of the music and current sound. For the live keyboard, we now only use the MS2000 from Korg, which is actually the first keyboard we ever had.

"We have all these instruments ready for improvising and playing the MIDI parts. It's fun today, machines are much smaller than they used to be so we can travel with a bunch of them."

What are the main challenges in the setup as a whole?
"We rarely have problems now, and we have enough machines and resources in case anything goes wrong. The computer is stable as we don't use any plugins or internal effects. The main challenge is to have all-round good sound, in the room and in the booth, where the three of us are comfortable, where we can all hear the different frequencies. We sometimes have 24 channels playing, so there really needs to be good acoustics.

"Sound is the most important thing for us and it mostly defines whether we have a good show or not. If we don’t hear ourselves well, we don't enjoy the set, and if we don't enjoy it, then people might not as well. So yes, the main challenge for us is not the technique but the sound."

What advice would you give to someone who wants to take their music live?
"Compose your music with a setup close to how you project yourself to play live. Make music that you will be able to reproduce on stage. Know your instruments better than anything. Use Instruments that are able to travel and adapt to different surroundings – hot or wet places, sand or humidity.

"To be honest, playing live is more fun with others. Solo performance is something, but it's often more exciting and surprising when there's already two people.

"And yes, don't plan too much, it's never working and often too cold, always leave space for improvisation and a swift change of plan. Music is good when it's connected to the moment, to the people and the place. Always keep a setup where you can have fun, where you’re not a prisoner of your gear or plan."

"Playing live is more fun with others. Solo performance is something, but it's often more exciting and surprising when there's already two people"

What do you think is behind the current growing trend in live electronic music?
"People are bringing more and more tools into the booth, jamming live, leaving space for improvisation. Live bands really try to offer sound quality, and it brings a bright and refreshing future to electronic music, a big space for experimentation where people are both dancing and listening.

"Our scene is kind of unique and I guess it's why it's inspiring many other genres. We are able to fill spaces without commercial aggressive ugly music."

What piece of gear would you love to add to your setup and why?
"A Music Easel from Buchla and a MIDI saxophone. The only limitation is that generally, it's really scary to travel with expensive pieces of tech that took you years to get hold of. If you travel like we do and your equipment gets broken, it's very difficult to get something back from plane companies, but this can’t be the reason to just play sets with a laptop and a controller."