The past 12 months have seen the worlds of dance music and gaming intertwine like never before, with major real-life DJs hosting in-game concerts. Sian Bradley explores how these collaborations create unique experiences for users and new publicity and sales opportunities for artists...

Dance music culture has invaded gaming, and is blurring the line between the real and virtual world. Big gaming companies are recruiting dance music DJs for more than their music. They are co-opting their image, their brand, their personality and weaving their digital avatars into a video game storyline.

Exhibit A: Rockstar Games released an extension to GTA V called After Hours in summer 2018. The aim of the game is to turn an empty warehouse into a thriving nightclub; all as a front for an illicit business, of course. When you’re not busy building a criminal empire, you can dance away the hours to a selection of resident DJs. These DJs aren’t GTA fantasies, however; they are virtual versions of real-life underground acts The Black Madonna, Solomun, Tale of Us and Dixon. Rockstar Games even provided specific missions for each DJ and announced the dates they’d be playing in the weeks following the release.

Epic Games got in on the action earlier this year, and recruited Marshmello, one of the world’s richest EDM DJs, to perform a live concert in online shooter phenomenon, Fortnite. The simulated rave was advertised like a real event, with its location and time identified on a fluorescent banner. On February 2, Marshmello appeared in Pleasant Park — an area on the game’s map — before a crowd of eager Battle Royale players.

A reported 10 million players attended the live virtual show, holed up in bedrooms across the world, plugged into a global server. It streamed on a no-weapons mode with unlimited respawns, meaning players wouldn’t have to worry about their avatars being killed. No stats were recorded; it was just for the fun of it. Lights, lasers and 3D holograms dazzled the crowd as they were launched into the sky when the beat dropped on Marshmello’s track ‘Fly’, and swung bouncy white pickaxes around floating beach balls during ‘Happier’. 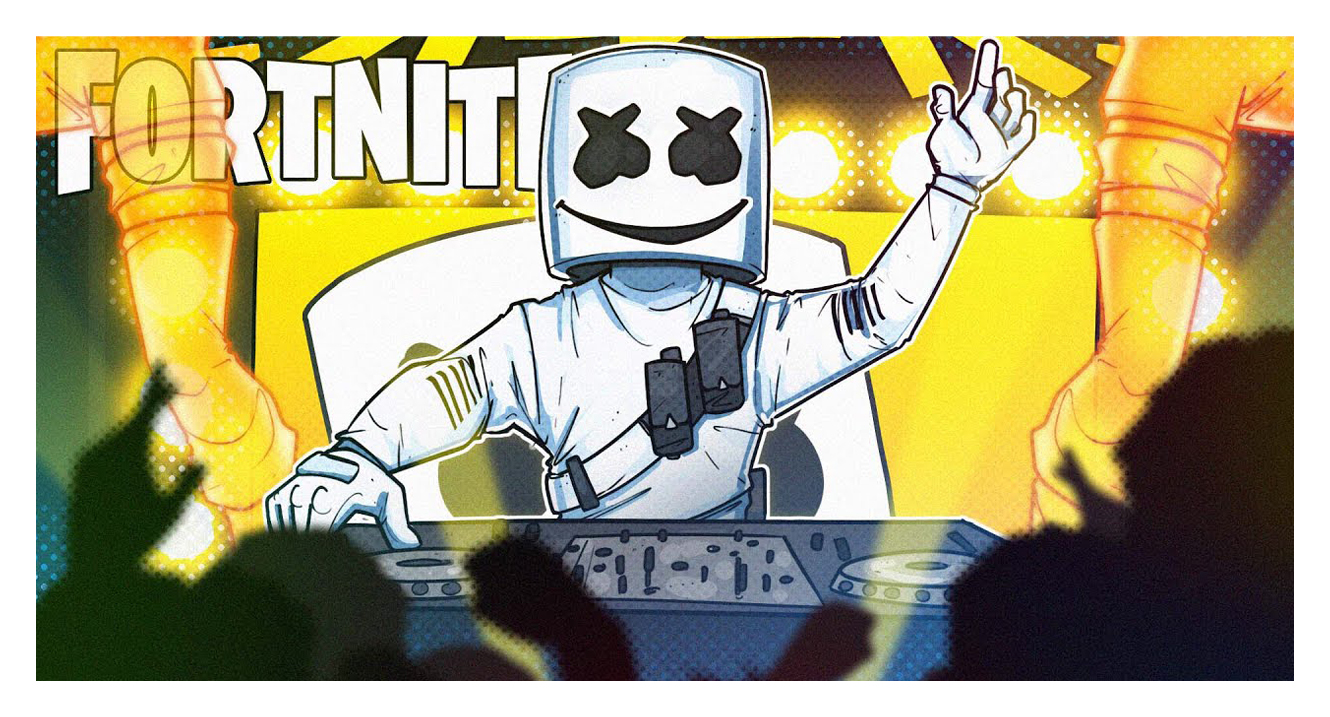 And it was an incredibly clever business move. Following the concert, Fortnite released a Marshmello ‘skin’ (a costume avatars can wear) for $15, and Marshmello extended the hype by tweeting game footage playbacks in his skin. In the real world, a Fortnite X Marshmello hoodie set you back $55.

Is this exploiting younger Fortnite players who may splash out to feel connected to this exciting online community? Maybe so — but the excitement it’s drummed up is apparent. This was some young people’s first concert experience, and they became fans by discovering Marshmello’s music in their favourite game.

Virtual technology is pushing the boundaries of how gamers can interact with musicians, and is making dance music more accessible to newcomers and more exciting for existing fans. Just imagine if you could have interacted with your favourite artists whilst playing your favourite game as a child?

This writer’s fourteen-year-old self would have fainted at seeing Beyonce rock up to her Sim to say “Schloopy!” or some other Simlish gibberish. These latest developments signify a generational shift; the kids who fell in love with Monstercat’s music years ago through block-building game Minecraft are being replaced by Fortnite shooters, amazed by Marshmello’s flashy performance.
Almost anything is now possible in these virtual worlds. Even sci-fi institution Star Trek jumped on the dance music hype. In February 2019, American EDM star Steve Aoki became a Romulan Officer in the mobile game Star Trek Fleet Command — under the name D’Jaoki.

"Virtual technology is pushing the boundaries of how gamers can interact with musicians, and is making dance music more accessible to newcomers and more exciting for existing fans"

Music and gaming have long gone hand in hand. People remember the joy of flicking through radio stations whilst cruising down a highway in GTA San Andreas — or screeching round bends, mounting pavements and mowing down pedestrians, depending on how reckless you felt like playing that day. Then there’s the games that were solely about the music — Guitar Hero and Singstar — which opened up a library of tunes to pre-Spotify teens, helping to widen music tastes and giving a fleeting sense of being a rockstar. This generation’s gamers may be feeling the same about dance music tracks in the future. As we move forward in this century, the importance of a soundtrack that was once so memorable in old school games like Zelda, Crash Bandicoot and Tony Hawk’s Pro Skater may be lost to immersive gigs and events.

Technology is making this symbiosis more sophisticated. Social media means it’s easier for collabs to go viral and for people to give instant feedback. Marshmello’s Fortnite concert attracted the biggest crowd that he has ever played to, and has since been viewed over 31 million times on YouTube. That’s understandable, given that as of last November, Fortnite’s total registered player count topped 200 million.

If it was a publicity stunt, it definitely worked. Between February 1st-7tb, Marshmello’s Instagram follower count spiked, and has since increased by more than 2 million. He was mentioned over 50,000 times on Twitter on the day of the concert alone. This single, virtual concert has widened his fan base further than any of his real-life shows have so far, as an estimated 80% of the attendees weren’t fans or hadn’t even heard of Marshmello before the concert. This is the kind of promotion that makes music managers squeal with delight — especially if, like Marshmello, artists are in the midst of releasing new tracks.

"Marshmello’s Fortnite concert attracted the biggest crowd that he has ever played to, and has since been viewed over 31 million times on YouTube"

Whether you use Spotify, Apple Music or SoundCloud, streaming services have changed the way we consume music. Aside from paying for premium subscriptions, we expect to hear music for free. Whilst artists can still make money from streams, for most, it’s a pittance. This shift has caused artists to place more importance on branding: the tours, the merch, the sideline hustles and products. For dance musicians in particular, featuring in games is a more relevant way to develop their brand than releasing a clothing line.

At the same time, games have become a viable music promotion platform. In 2018, Italian duo Tale Of Us spun brand-new techno beats in their GTA nightclub set, drumming up interest for a new album in a virtual world. In-game city Los Santos’ first resident DJ, Solomun, went a step further and celebrated the hundredth release on his label, Diynamic Music, with a music video that was created entirely in-game. This was the first time an artist had debuted music via a game — but it certainly won’t be the last. 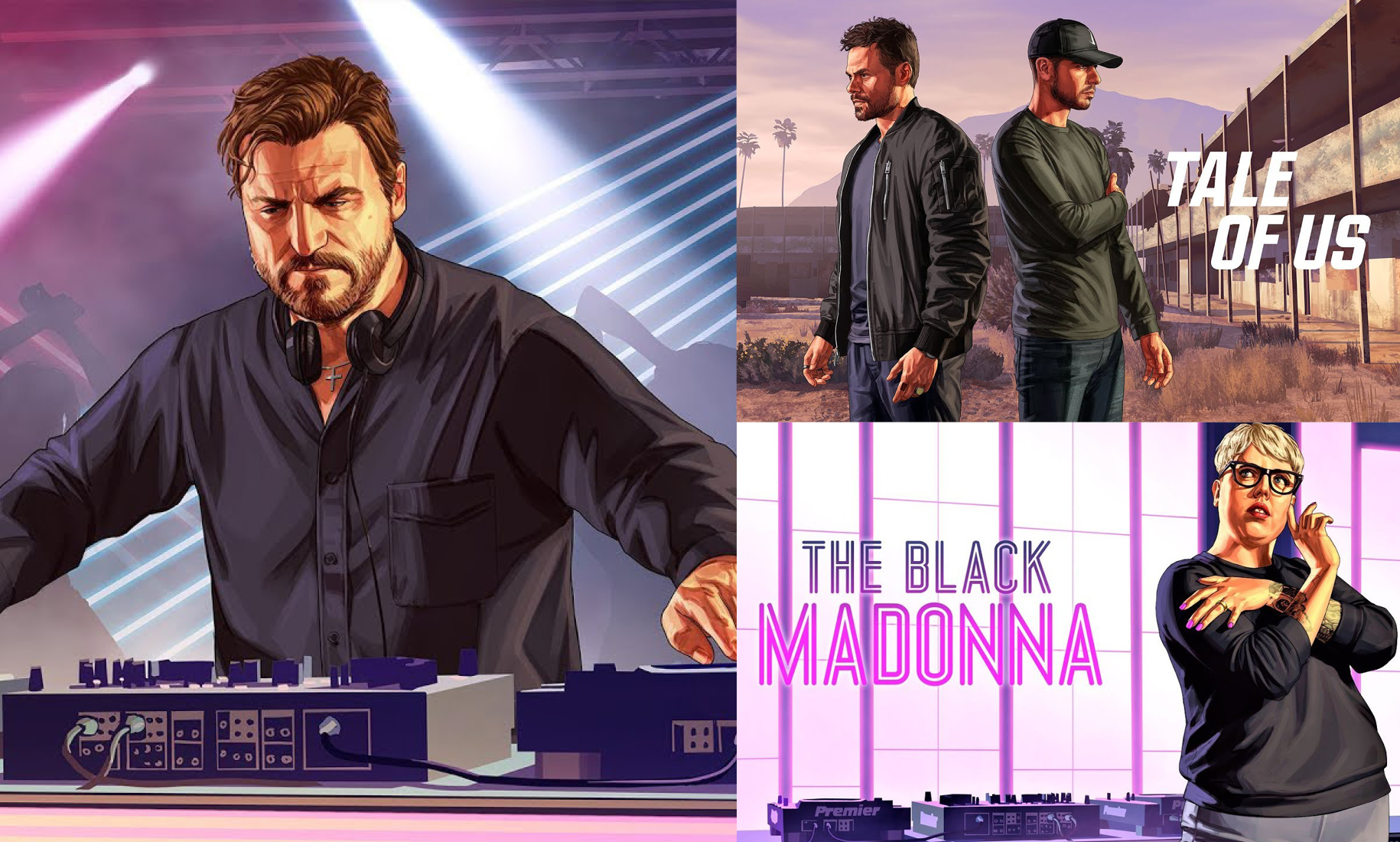 Not only can gaming support artists and their music, it can subvert exclusive festival culture. That’s exactly what producer Max Schramp, known as Sleepycatt on SoundCloud, did with Coalchella — a Minecraft-based event that remains the most elaborate virtual festival seen in gaming to date. The promotion and organization was given the same effort, care and attention that real-life festivals get — it was just all done, and seen, from behind a screen.

The idea of an in-game concert is nothing new, but the tech is finally at a level where it can be impressive, captivating, and reach a significant amount of people. Marshmello’s 10-minute-long concert took six months to prepare. As Marshmello’s manager, Moe Shalizi, explained to Rolling Stone, the DJ was “in this room, geared up head-to-toe with a body-motion suit and everything, with maybe 30 or 40 people [surrounding him as technical support staff]” for the duration of the gig.

"For dance musicians in particular, featuring in games is a more relevant way to develop their brand than releasing a clothing line"

Virtual Reality has been skirting around the edges of tech innovation for years, trying to find its footing. Simulated environments have been experimented with as a therapy for PTSD, used to help soldiers and health professionals to train, and to make immersive porn. Most commercially, VR is used in gaming headsets. But they don’t come cheap. The Oculus Rift system will set you back around £400, and the HTC Vive is closer to £500. The price, combined with the awkwardness of the headsets, means that sales have slowed down since VR’s 2016 rise into the consumer consciousness.
Regardless, there’s potential in VR and immersive gaming; a fact that tech companies are well aware of. Offering live sets means gamers can be told to play at specific times — which makes it easier to hold their attention. As body-tracking tech becomes more sleek and sophisticated, musicians can be beamed live into video games with growing ease, and players will be consumed by virtual worlds. Online gaming specifically monetizes through exploiting player’s desire for customization; buying outfits for your characters, paying for exclusive content or modifications. This makes it a perfect candidate for selling dance music as a product.

The hype of GTA After Hours and Fortnite will die down. New dance music DJs will take centre stage. But the integration of gaming and music will only continue to strengthen. How this is received is up to the next generation of players, who may not realize that the next time they log into their favourite game, they could come face to face with a world-class DJ.